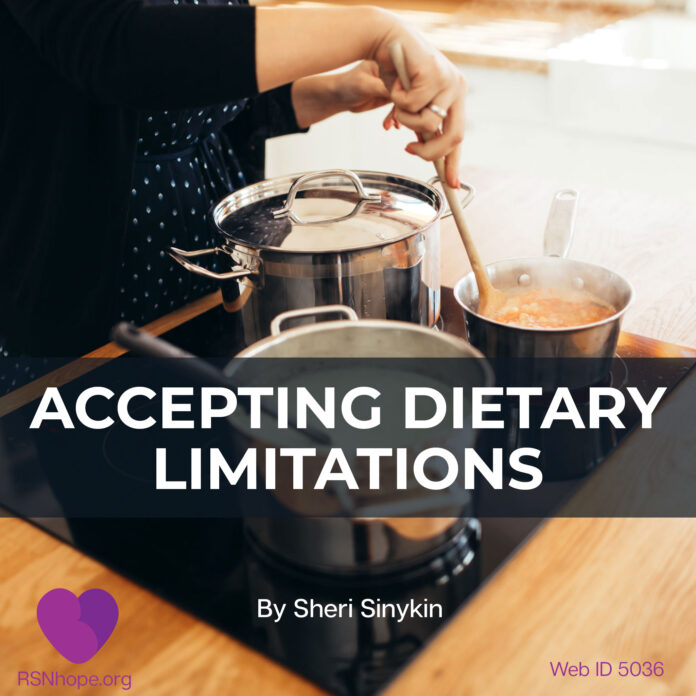 My road to a happy food experience on the renal diet has been bumpy, rife with potholes. For most of my life, I lived to eat—and not in a healthy way. Constant dieting and obsessive-compulsive thinking and behavior around food seemed normal. Only recently did I come to understand I’d been grappling with an eating disorder for 55 years. Finally, with therapy, I began to heal. Obsessing, eating when I wasn’t hungry, and compulsively weighing and measuring myself and food no longer ruled my life. I felt free.

Until CKD Stage 4 and the renal diet.

As with any diet, I had tried over the course of my lifetime, I embraced the renal diet “perfectly” and obsessively for six weeks. I weighed, I measured, I tracked sodium, potassium, phosphorus, and protein. Never a cook, I even attempted kidney-friendly recipes I’d found online. Many weren’t worth the effort. But to my surprise, my long-elevated liver enzymes improved to barely above normal. High triglycerides fell by 200 points. Without setting an intention, or trying, I lost the 15 pounds I’d been attempting to lose for at least 25 years. Health benefits aside, though, I noticed an old eating-disorder behavior—compulsive scale-watching—creeping back into my life. Constant thoughts and fears that I would regain the lost weight invaded my waking hours. Suddenly and inexplicably, my GFR fell from 30 to 17, and I was hospitalized.

The dietary department provided “kidney-friendly” meals, but I couldn’t make myself eat them. They went against what I had been taught, and they tasted awful. Food textures bothered me as well. Fear of eating something that might further harm my kidneys edged out worries about weight gain. I begged off eating in restaurants with family and friends. How could I thrive if eating terrified me? Was it even possible to follow the renal diet without triggering my former eating disorder?

In the months since my hospitalization, I reconnected with my therapist and engaged a second renal dietitian who seemed to better understand my challenge. Tracking had fed into the old diet mentality that stoked obsessive-compulsive behaviors. Initially, I had interpreted “limit” as “eliminate.” I had grieved the absence of meat, cheese, soups, avocados, tomatoes, and so many other foods from my diet. And so, it cheered me when my new dietitian encouraged a different view of “limit” and “moderation.” If I plan appropriately, she said, there is still a place for some of these foods in my life. A new attitude about allowing beans and legumes as plant-based proteins opened up the possibility of again making the soups I used to enjoy. While I had once chafed at the limit of five ounces of animal protein per day, I realized that because I had lost my appetite, the limitation no longer bothered me.

My new dietitian gave me the gift of a more positive mindset. The renal diet didn’t need to represent deprivation and punishment for having zealously followed high-protein diets. Instead, it empowered me to take action to preserve my kidney function and extend my life.

In the midst of my journey toward a happy food experience on the renal diet, the coronavirus struck with a vengeance. My doctor warned me not to return to Massachusetts, as I’d done for the past 10 summers. Going to the grocery store here in Arizona became worrisome; few people wore masks and I have several risk factors. Shopping from a delivery app was not wholly satisfying either. Once again, a pothole appeared, challenging my ability to thrive on my new diet. The only thing I could change was my attitude.

I thought of my younger sister, who died too soon from an aggressive jejunal tumor. For several months she could not eat anything. I remembered how my mother could barely choke down a single scrambled egg when endometrial cancer was claiming her life. They both suffered, and here I was, bemoaning dietary restrictions. How ungrateful! I had escaped my family’s cancer curse, and all I had to do was consider how foods affected my kidneys! Overcome with gratitude, I realized I’d evolved full circle—from living to eat to eating to live. By accepting dietary limitations and enjoying the choices that remain, I can thrive. And I will—in Mom’s and my sister’s memory and in the hope of hugging my grandchildren, when at last we are all released from quarantine.

Sheri Sinykin lives with her husband, Daniel in central Massachusetts and in Sun Lakes, Arizona. In her spare time, she enjoys hanging out with her children and grandchildren, reading and collecting perfume bottles and dolls from foreign countries. She holds degrees from Stanford University and Vermont College, where she received an MFA in writing for children. She is an award-winning author of children’s books. Visit her website. 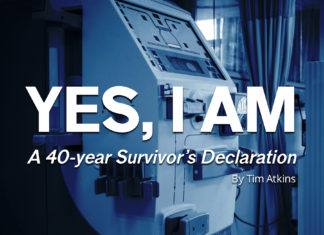