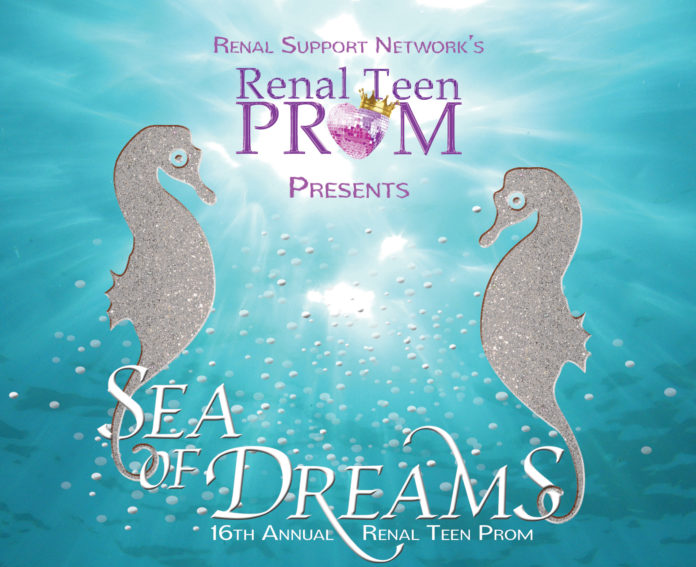 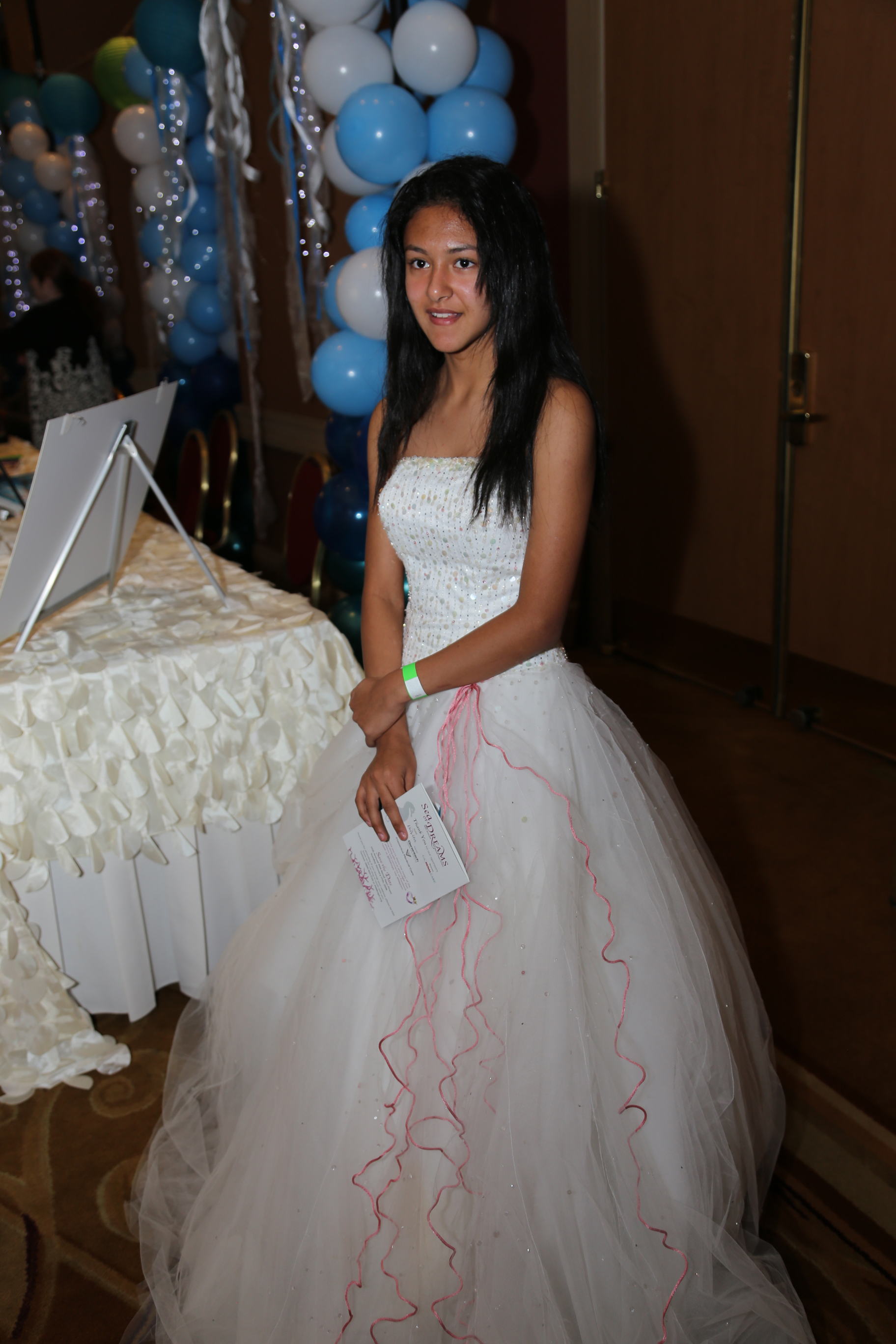 Young people facing chronic kidney disease enjoyed a “Sea of Dreams” at Renal Support Network’s (RSN) 16th Annual Renal Teen Prom in Glendale’s Hilton Hotel Ballroom. RSN’s Founder, Lori Hartwell, who missed attending her own prom because of kidney disease, created this event so other youth struggling with kidney disease could have the chance to enjoy it. Bringing this joy to others is a great joy in itself for the many volunteers, from the drivers transporting teens to and from the prom, the hair stylists helping with hair and makeup, nurses who work with people who have kidney disease and the Notre Dame High School students who set up the decorations and socialize with the teens. And of course, movie star Jack Black was there! 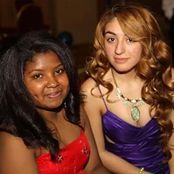 Many young patients return to this party year after year until they pass the age limit.Anahi Fuentes, 18, from South El Monte, came for the 4th time. Maria Curiel, 24, from Los Angeles, came for the 5th year in a row with her date Elias Anzures. Issey Hernandez, 21, said this was her 7th time attending. Each of them said they love the event and never want to miss it. They spoke as they were having their hair and makeup done by professionals. David Chandler, a stylist who travels all over the world and does many charity events, met Hartwell at a Beverly Hills kidney disease fundraiser. “She invited me here and I loved being a part of it. I’ve been coming ever since!” One excited teen, Harley Miller, arrived at the styling room and signed up to have her hair done. Miller, who had seen last year’s Prom on the internet’s YouTube.com, hadn’t been able to complete her senior year or attend her own prom in Eugene, Oregon. 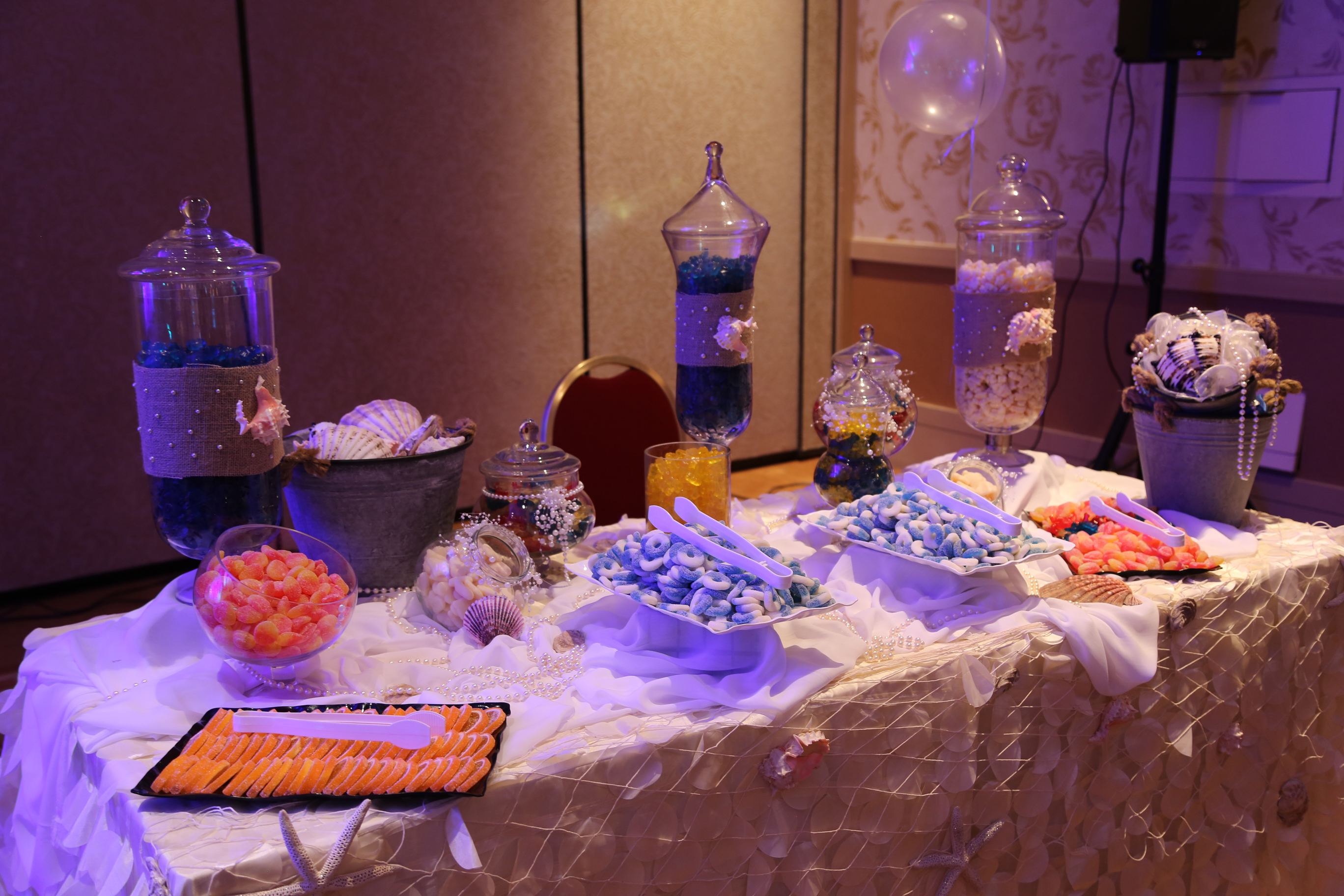 Joanna Galeas is one of RSN’s dedicated volunteer drivers. She heard about the prom when she was already past the cut-off age so becoming a driver was a way to get involved. “There are several drivers who bring kids from all over the area. I’ve had kidney disease since I was 15 but my kidneys lasted 10 years before I needed dialysis. I’ve been involved in RSN now for years and also help Lori connect with patients at RSN’s support group meetings.” Another volunteer driver was Richard Onibasa whose wife was a kidney patient who passed away in 2009 due to a post-surgical infection. “I got involved in RSN because I’ve seen the good work that’s been done and I want to remain a part of that.” Onibasa, who has been a volunteer driver for the past six years says, “I see some of the same young people year after year. One teen who I first met in high school has now started a college nursing program.” 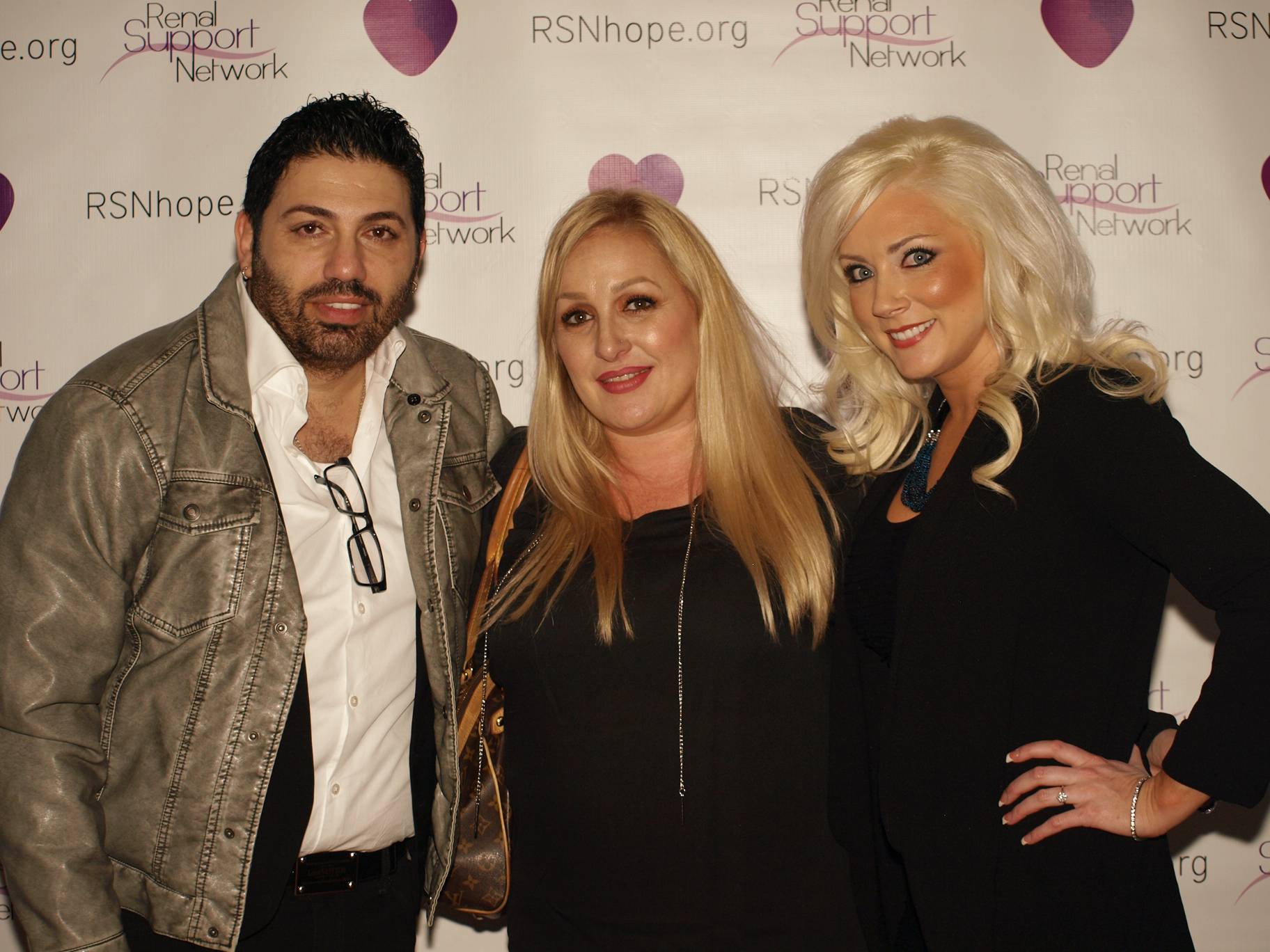 Professional stylist, Jacklyn Lopez, missed her high school prom due to kidney disease. Her 14-year-old daughter, Taylor, was at her side helping do makeup and was enjoying her supportive role as spokesperson, “My uncle gave my mother his kidney and she had the transplant six years ago,” said Taylor, “My godmother encouraged her to get into business as a make-up artist and even though she’s struggled with illness she’s done well. She just worked at the Golden Globes and she’s going to work at the Oscars this year too.” Her mother, Jacklyn, said she heard about RSN from a friend, and saw that they offered a lot of support. She gradually got more involved and this is her third year volunteering as a make-up artist for the prom. When Brenda Burroughs, Hartwell’s hair stylist, heard about the prom, she wanted to be a part of it. “Some of the kids are shy and some are outgoing. Last year I was the picture taker, as every kid wanted to have their picture taken with the star of the evening, Jack Black,” said Burroughs. “Jack spent time with each one of the teens. That spirit carries throughout the evening and it transforms your outlook! Through this event Lori has inspired all of us to look ahead, and to be the person who features the good things.” While Burroughs talked, a girl recently diagnosed with kidney disease arrived for a styling session. Her mother exclaimed to Hartwell, “Thank you for doing something joyful and lovely!” 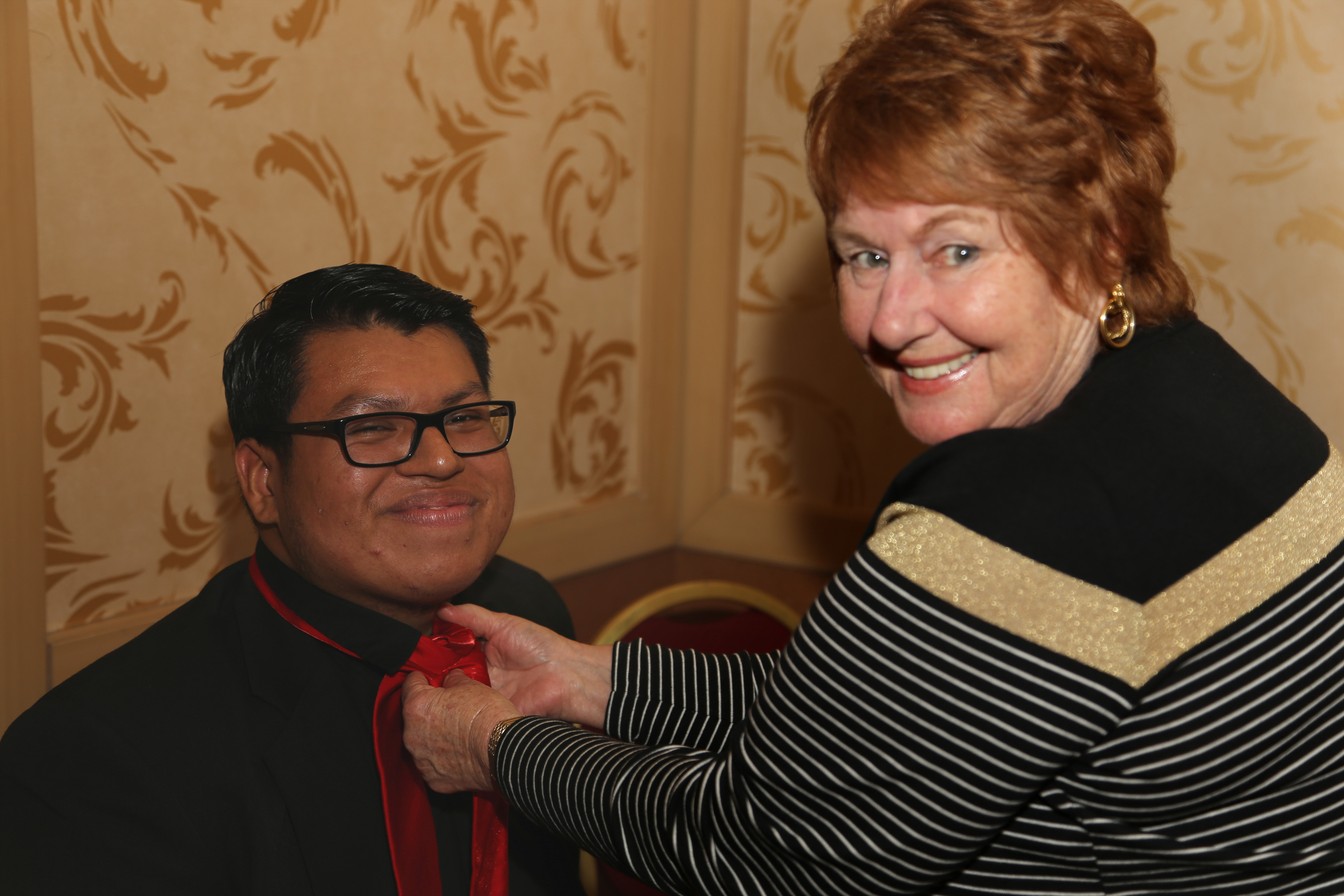 Lesley Holden, R.N., remembers Lori Hartwell when she was 7 years old and a patient, “Then I changed hospitals and didn’t see her for years. We reconnected several years ago when she was in sales – promoting an excellent product that helps with fluid removal during dialysis. I live in Santa Monica now and I’ve helped with every one of these proms. I also help organize the boutique where girls get to pick out donated dresses. I absolutely love being involved and helping empower these patients.” Holden was busy coordinating appointments for the nine stylists and 24 girls who had hair and makeup done, “The best part of this event is seeing these young people enjoying themselves in a completely different setting that takes their mind off their illness,” added Holden as she guided another teen to a waiting hair stylist. 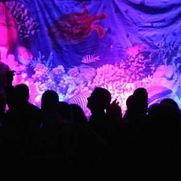 The most popular service opportunity for the students at Notre Dame High School is looing forward to setting up and attending RSN’s annual Prom. “This event has so much buzz,” said acting chaperone Bill Lawrence, a teacher at Notre Dame. “It attracts a great cross-section of students: athletes, robotics students, drama kids, and academic superstars – they love creating a great party atmosphere for the teens!” Notre Dame Librarian, Tully Rosado, was also on hand as a chaperone. “I love the spirit of this event and so do our students. They say they enjoy it even more than their own school prom!” Notre Dame’s students have been participating in RSN’s proms since its first one 16 years ago. “The Notre Dame seniors are the secret sauce of this event,” said Hartwell. “They attend training sessions about dialysis and transplantation and I inform them about the challenges faced by young people with kidney disease. They come eager to mingle, dance and enjoy time with their peers.” 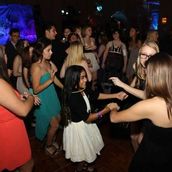 Outside the ballroom was ABC News anchor and this year’s MC, Philip Palmer, who donated one of his kidneys for a co-worker in 2007 and learned about RSN as a result. “You don’t have to have kidney disease to relate to this event,” he said. “It’s so special to see these kids not only get to have a Prom but to be around others like them in a social, party atmosphere.” Later in the evening Palmer introduced Jack Black to the stage. Black entertained the teens, encouraged them to dance the night away, and spent the rest of the night meeting with each young guest who wanted to have a picture with him. “The general public doesn’t really know how nice a person he is,” said Palmer. “He spends time with each teen at this event and at other RSN events he supports.” In the foyer a mom who had brought her daughter was clearly enjoying the party but also used the opportunity to compare notes with other parents on finding kidney donors. Inside the ballroom another loyal volunteer had fashioned a huge paper jelly fish with long streamers and was carrying it through the crowd of dancers just above their heads. It truly was floating with them on their “Sea of Dreams!” 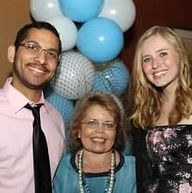 The Renal Teen Prom is the inspiration of Lori Hartwell, RSN’s President andFounder, who missed her own prom because she spent all her teenage years on dialysis. Many teenagers with kidney disease miss large amounts of school because of prolonged absences due to health. The prom brings these young people together to share their experiences, strengths, and hopes. It lets them know they are not alone and that ‘one friend can make a difference’. 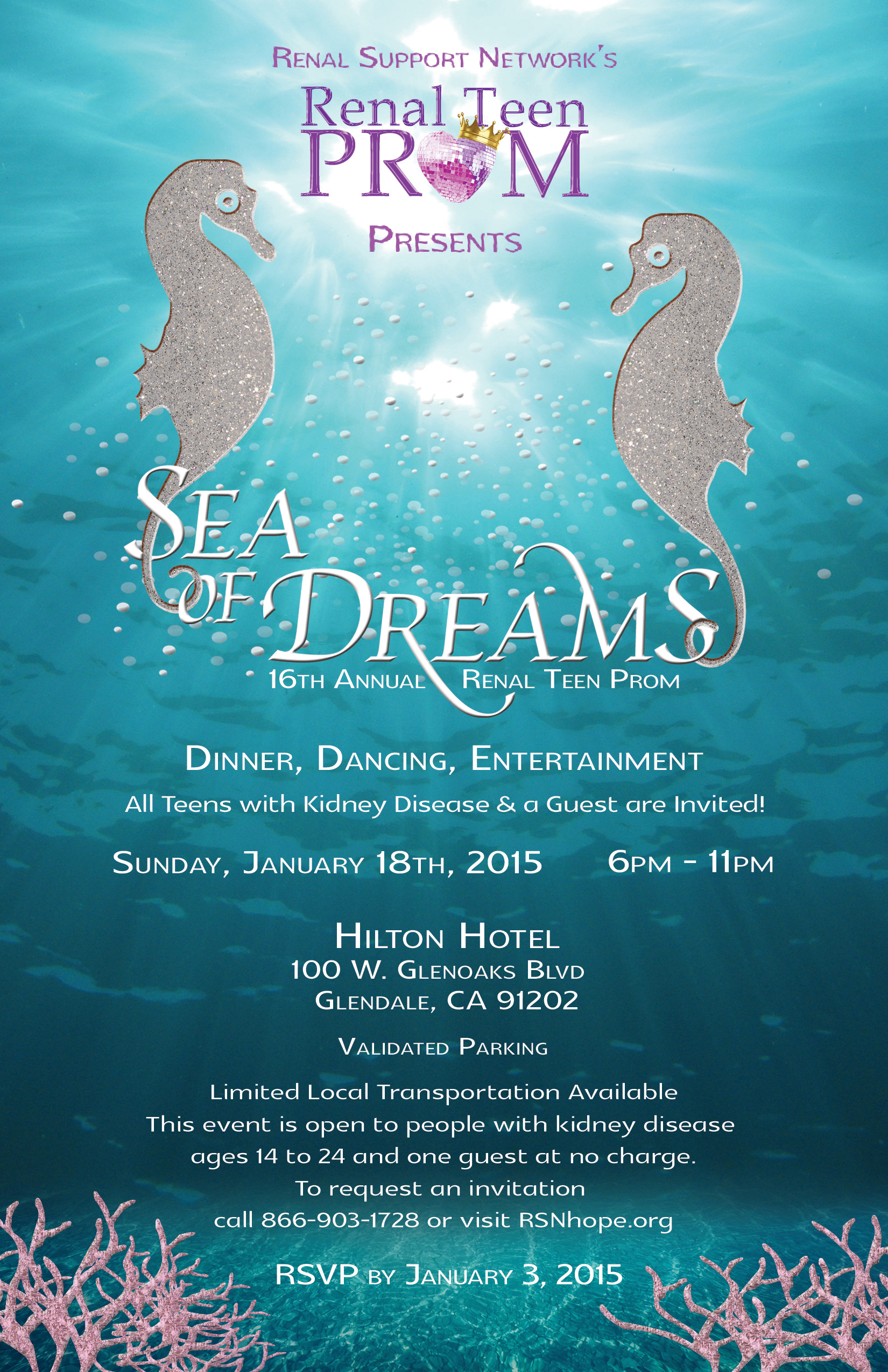 If you would like to help make RSN’s Renal Teen Prom a success please visit our contributions page to help support Renal Support Network and its programs.