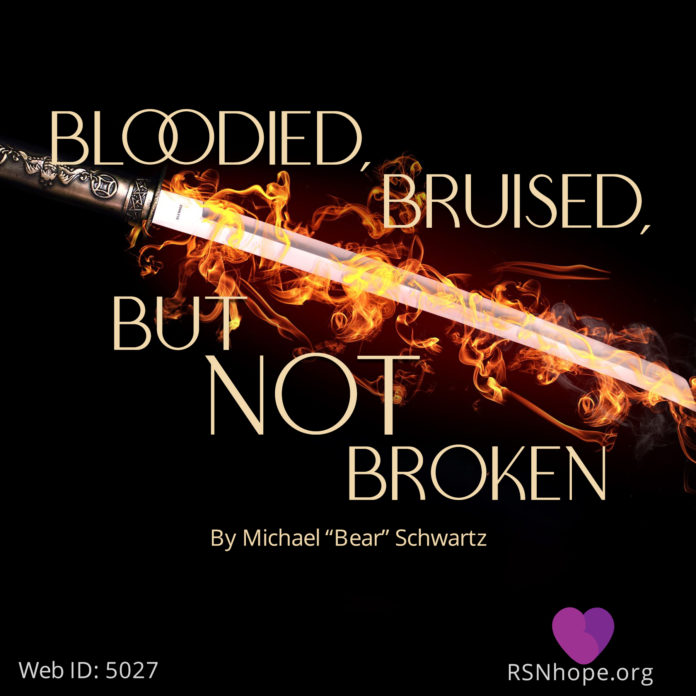 Few people are born warriors. Most often, those called to battle are ordinary commoners forged into fierce combatants by the fires of tribulation. The latter is how I find myself in my struggle with End Stage Renal Disease (ESRD).

As is true with most fighters, I did not seek out the battle; the battle was thrust upon me. For ten years I have dealt with kidney disease. Over eight of those years have been on dialysis. The unrelenting enemy pursues me every minute of every day. I never knew the steel and grit that resided in my soul until it was summoned by this vile foe.

No soldier enters battle alone. I’ve heard it said that for every boot on the ground, there are up to ten that support the one. I am no exception. Without my support system, I’d be little more than another victim that has succumbed to this disease. However, the statement that I have the disease is truer than the disease having me. This support network includes my nephrologist, dietician, social worker, pharmacist, transplant nephrologist, transplant surgeon, cardiologist, psychologist, neurologist, podiatrist, the host of nurses in all of these offices, as well as my transplant support staff which includes a myriad of people. But, my most valuable comrade-in-arms in all of this is my wife, Brandie.

Brandie is the reason I fight. A warrior can only be as effective as the cause for which he fights. To selfishly swing at my opponent for the sole purpose of clinging to life would be an empty cause, indeed. My wife is my everything. It takes very little to die for another, especially for a worthy cause. But, to live for another, especially in light of excruciating, life-saving treatments, is quite another thing.

If I discarded all the measures I take—like dialysis, medication, and regular medical procedures—to continue my life, I would leave this world in a matter of weeks. But, I have a woman that loves me and with whom I, in turn, am in love. I wage war with my enemy to see another sunrise with the one I love. While there are other family and friends that hold my heart’s attention, only one holds my heart so completely. It is for her that I shake my fist in rage at this antagonist that has stolen so much from me already.

Bloodied, bruised, bowed, but not broken, I stand before my enemy. Battles have been fought and lost. I received a transplant from a friend. Fate, in all her cruelty, took it from me by assailing it with a virus. Hospital stays, amputation of a toe, surgical revisions of my dialysis access, and a host of other procedures have oftentimes brought me to my knees. I have battled depression, anxiety, and needle phobias. It is a cruel fate to be stricken with a malady like ESRD that requires dialysis to remain alive when one suffers from needle phobias. Dialysis requires large needles to pierce my body multiple times a week for hours on end to administer the life-saving procedure.

So, there lies the battle. It has stolen time from me to be with my family, make music, take trips, and enjoy life. The query given is how I have won the battle with this illness. The answer comes in multiple ways. Whenever I have the chance to pour into the life of a child, I have won a battle. Whenever I awaken to enjoy another morning cup of coffee with my beloved wife, I have won a battle. Whenever I watch my grandchildren run in the yard with my dogs, I have won a battle. You see, winning a battle is not one specific moment. It is a host of moments that the enemy couldn’t destroy. This is how I battle this illness to win; one battle at a time. I live life to the fullest measure that I can for as long as I can.

My journey has taken me to the gates of hell and pushed me therein. It isn’t where I want to be, but where the battle has led me. So, if I’m to be forced into this landscape, I’m going to walk around like I own it. 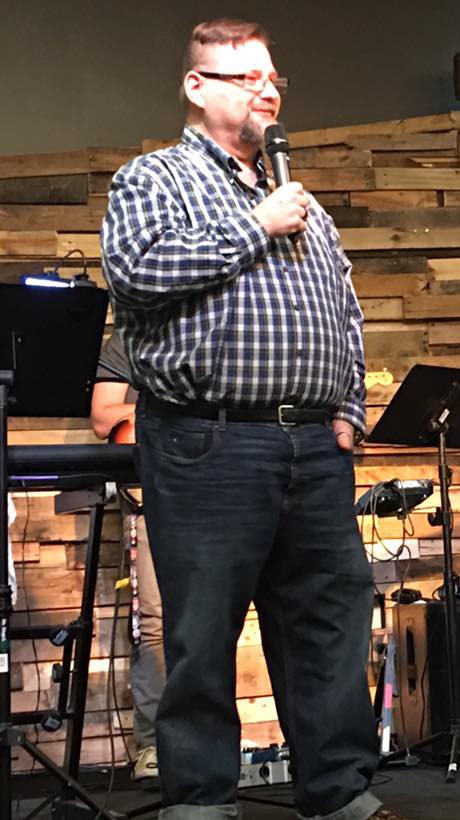 Born in 1966, Michael Schwartz, affectionately known by his friends as “Bear”, is a native to California who now lives with his wife and family in Texas. He is an accomplished trumpet player, composer, and arranger. Clients have included Ringling Brothers, Medieval Times, Disney, and a number of bands, civic light operas, and universities in California, Missouri, Texas, and Arkansas.

During his tenure at the Missouri State University where he earned his Masters Degree in Music Theory and Composition, Bear had the additional responsibilities of being a teaching assistant to the Theory and Jazz departments

Unfortunately, during the process of getting a medical check up to take a playing job with Royal Caribbean Cruise Lines, Bear discovered his renal disease. Eventually, he suffered End Stage Renal Disease. During the course of a few months, tremendous challenges faced Bear and his wife, Brandie. They lost their home, a set of twins, and his health. ESRD resulted in his need for dialysis multiple times per week. However, he did not let this deter him from his scholarly, musical, or family responsibilities. He was determined to have the disease and not let it have him.

As a resident of Texas, he continues to both teach and play. He teaches music at a local music school. Additionally, he teaches music to children K – 8 as well as a youth praise and worship band at a local private school. His performances included musicals at local high schools, community theaters, and churches as opportunities arise.

He did receive donated kidney, but it was ravished by a virus and resulted in its failure and the need to be back on dialysis. Bear is currently back on the list and is anxiously waiting for the day when another kidney will be made available to him. Hope reigns supreme.