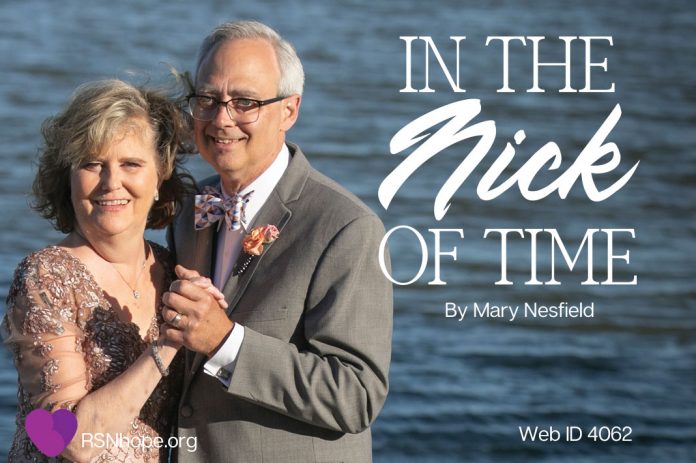 To this couple, a donated kidney is worth its weight in diamonds.

Leslie Carey was diagnosed with kidney disease in 1988, the year she turned 27. It was something with which she was familiar. Nine years earlier, her father was undergoing dialysis for polycystic kidney and liver disease. His doctor advised his daughters to be tested. Results showed that both Leslie and her older sister inherited the disease. Leslie’s lab numbers looked good, but her sister was not so lucky. In 2009, Leslie’s sister died following a liver resection surgery. Leslie went on with her life as a single woman hoping that healthy lifestyle choices might delay the inevitable. She had yet to meet Nick.

Nick Manzano was about to become an “empty nester.” His wife succumbed to breast cancer the same year Leslie’s sister died. Nick had not been on a date in more than 30 years. He set up an online dating profile and discovered Leslie’s profile. He contacted her to set up a first date.

“We got each other almost instantly,” Nick said, and they grew closer as they shared their stories.

While on their fourth date, Leslie let Nick know she had chronic kidney disease. He asked questions and scoured the internet to learn more. One date led to another, and then, in 2016, Leslie began experiencing symptoms of a urinary tract infection. A blood test showed a high level of potassium. Two weeks later she was diagnosed with Stage 5 kidney disease. Doctors started her on peritoneal dialysis. Complications arose two years later, and she was admitted to the hospital for diverticulitis. The infection spread to her peritoneal cavity and she contracted sepsis. Her doctor switched her to hemodialysis.

Meanwhile, Nick’s father and mother both died, leaving him to go through their belongings. He found family rings and showed them to Leslie. She picked up Nick’s great grandmother’s ring and tried it on. Coincidently, it was a perfect fit. Was it a sign? 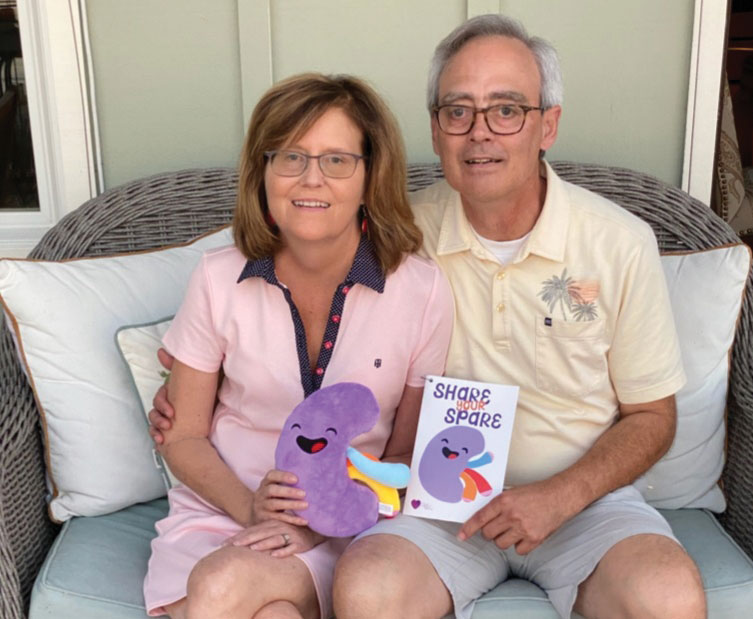 Leslie had been going to a center to dialyze. There she found the Renal Support Network’s (RSN) KidneyTalk Magazine. One day, in her final year of dialysis, Leslie learned about the RSN’s “Share Your Spare” campaign featuring Neff and Nuff, two animated characters that talk about kidney donation. Nick was learning more on the golf course about being a donor as well. While with a client, who happened to be a retired doctor, he shared Leslie’s situation. The client relayed the story of a man who, at age 60, donated one of his kidneys to his spouse. Coincidently, Nick had turned 60 that year. It got him thinking. When his wife was dying of cancer, there was nothing he could do to save her. But this time, with Leslie, he came to realize there was something he could do. He was tested as a donor and was a match for her. He volunteered to “share his spare.”

Surgery was on! While Nick was being wheeled away, he told the anesthesiologist he had a ring at home for Leslie, but said he had not yet proposed. The anesthesiologist asked him if he wanted to talk to Leslie. He said yes, and with that, he was wheeled over to Leslie’s bed, where he proposed. That was the last thing Nick remembered before surgery. Later, when he woke up, the nurse showed him the following words written on paper: October 8, 2020. Nick & Leslie. She says YES!

When talking about his recovery, Nick said, “It was way easier than I thought it would be.” He believes that if people knew the process was not as bad as they may have expected, more might step up to donate.

Leslie says, “Staying positive and upbeat, and educating yourself, helps. Share what you’re going through. Network.” The support Leslie got made dealing with the challenges she faced less stressful. “I just wish I had known about the Renal Support Network earlier,” she says. Still, the message that Neff and Nuff relayed got through “in the nick of time.”

In June of 2022, the couple married. “We have everything we need,” Nick says. And that’s why in lieu of wedding gifts, the couple asked for donations to RSN. What makes their marriage a happy one? Nick says, “It’s listening, not giving up, and practicing random acts of love and kindness.” Leslie especially likes the random acts. No doubt, because one of those acts saved her life.

Mary Nesfield has enjoyed a long career in magazine publishing.
She is a freelance writer and editor for Renal Support Network and works from her home in Columbia, South Carolina.