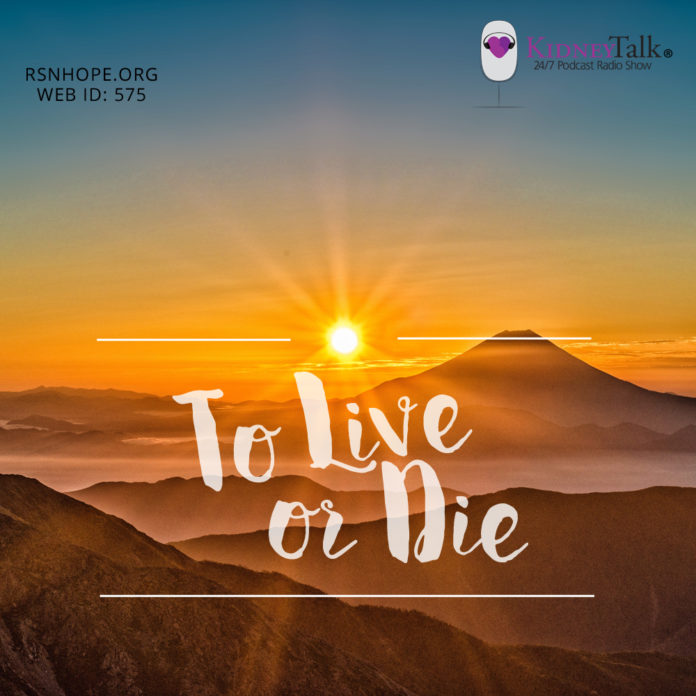 Ever heard the saying; ‘Ignorance is bliss?’ Dawn Dungan, a homemaker & writer exemplifies exactly why this saying can in fact be true.

Dawn was introduced to the renal community when her brother was diagnosed with ESRD in 1985. She became his PD partner, and through that experience, found employment in a dialysis unit. She gained an insurmountable amount of knowledge about Kidney Disease. If you asked her, she’d say “too much information.” The risks, the complications, and the expected future, and because of this she had developed a phobia.

As if someone was directing an award winning dramatic film, Dawn found herself in the same shoes as her brother. Dawn says; “I was more afraid of dialysis and kidney disease than I was afraid of dying.” Dawn chose the no treatment option, which left her with 3 – 6 months to live. She soon realized the hardest part of her decision was living in the guilt of looking at her family and knowing the pain that she was causing. But as Dawn says; “Tremendous amount of fear will make you choose things over guilt.”

Listen to this week’s inspiring story of HOPE, and learn what the turning point in Dawn’s life was that made her say ‘Wait! I’m going to wake up! I’m going to take charge of my life, and I’m going to continue to live!’

Dawn is truly RSN’s shining pillar of hope, our very own mascot. As an RSN employee she’s helped make RSN what it is today. As a participant of weKAN – a patient activist for kidney patient rights, she’s helped make a difference as she’s met with congressmen in DC and garnered co-sponsors for several CKD related bills. As an RSN PEPP speaker, Dawn helped other patients become leaders and fellow activists. Dawn is a god-send, and you will truly be inspired, and filled with a new perception on life and hope!