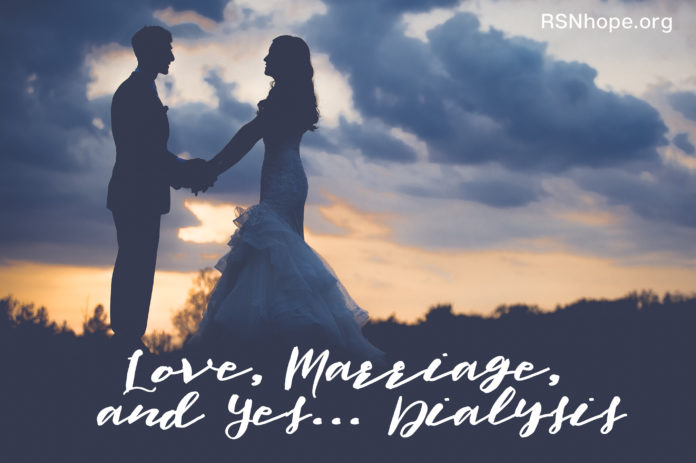 Every story has a beginning as does every relationship. For Cyndi and me, it began in high school after I had been diagnosed with glomular nephritis at the age of 15. We met at our church’s youth group and I have always said that she had me from “Hello.” We went to prom together in 1985 as friends, but never crossed the line of friendship in high school.

I went into full renal failure in September 1996 and started peritoneal dialysis in October of that year. As we tried to keep in contact through the years, Cyndi learned of my health problems, but never truly understood what was going on. I received a transplant on Mother’s Day, 2000 and hoped my life would begin again, but it was not to be. For the longest time, I tried to blame everyone else for the failure of my transplant, but in truth, the fault lies completely with me and the way I chose to live at that time. I restarted dialysis in 2002, doing in-center hemodialysis which works very well for me.

It wasn’t until 2007 that Cyndi and I reconnected again. It was only by chance that her name came up in a conversation with a mutual friend. We started talking again and spent New Year’s Eve together that year, seeing each other for the first time in almost seven years. After that, our relationship continued just as it had been in high school with one big difference now there was true love involved that took us both by surprise.

Cyndi realized very soon that she had a lot to learn about dialysis and everything involved with it. She attacked it vigorously, especially after having seen me do dialysis when we met for the first time. We continued to meet and she continued to learn more about dialysis. It was during one of our trips to see each other that she asked me to marry her; that simple question brought tears to my eyes as I really didn’t think anyone would want to put up with the strain of dialysis on a relationship.

That was in April 2008 and on April 25, 2009, we were married at our house in Portage, Michigan. To say that I have found the perfect caregiver and partner is an understatement. She strives to understand all she can and encourages her children to do the same, just as my daughter has done for years. Though she is still very nervous about dialysis-related things, I believe that will pass in time.

We continue to be happy and I am transferring to the Michigan transplant list so that hopefully I can receive another transplant, even though my life has already begun again.

About the Author
Anthony Brown is a 12 year veteran of dialysis having done both peritoneal and hemodialysis after being diagnosed with CKD in high school.  He received a transplant in 2000 that eventually failed and returned him to dialysis.  He keeps active with his new bride Cynthia and is a domesticated house husband.  He is also striving to become more involved in weKAN and RSN. Anthony also advocates for the education of others on CKD and Donor Registry. Anthony and Cynthia reside in Michigan.