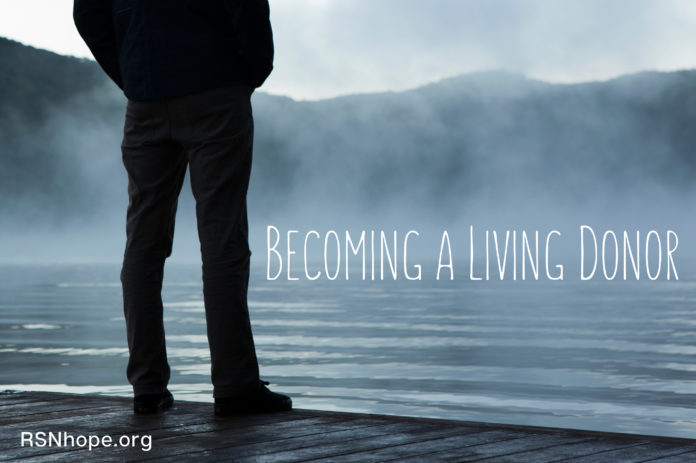 A few years ago, an in-law of mine was in rapidly declining health. He had been diabetic since his teen years, and now the diabetes was causing his kidneys to fail. He needed a transplant. For a variety of reasons, his blood relatives were not able to donate, so I volunteered. My friend Virginia Postrel had written about donating her kidney, and from her article I knew a couple of important things. First, although any major surgery involves risk, kidney donors usually fare quite well. Second, new surgical techniques have made things much easier for the donor.

We were able to schedule the transplant for early summer, which smoothed the path even further. I teach college, and as the old joke says, the three best reasons to go into my line of work are June, July, and August. I didn’t have any teaching responsibilities until fall, and recovery from surgery would not hamper my writing. Most academic research is not exactly strenuous, especially in the era of the Internet. So for a minimal amount of risk, pain, and inconvenience, I could help somebody in trouble. It was not a hard call.

So far, so good. Most of my family members supported my decision right from the start. Not surprisingly, my mother was a tougher sell. But just before the surgery, when she joined me at the hospital and saw how sick my in-law looked, she turned to me and said, “You’re doing the right thing.”

Although I had never undergone major surgery before, I was not especially nervous. The operation took place at Stanford, a world-class hospital that had never lost a kidney donor during a transplant. They put me under, and I woke up a few hours later. Once the anesthetic wore off, the incision was uncomfortable, but not unbearably so. (I’ve had worse pain from greasy French fries.) I was on my feet the next day, and out the door three days after that. It helped that I had prepared for the surgery as if I were training for an athletic event: losing weight and stepping up my existing workout regimen. The doctors told me that this approach hastened my recovery.

The surgery was a success. Though my in-law’s recovery was much rougher than mine, he regained his health and went back to work. He has to take medication to prevent his body from rejecting the kidney, but it doesn’t limit his activity. And I don’t have any serious restrictions as a result of the surgery. There are certain pain relievers that I should avoid, but I never used those particular products in the first place. I should drink plenty of fluids, but then again, so should everyone else. There is a faint scar on my lower belly – which is no big deal. At my age, I don’t aspire to be an underwear model.

My in-law and I had always been close. The surgery brought us even closer, as if we were blood relatives. In a way, the transplant made us so.

John J. Pitney Jr. is the Roby P. Crocker Professor of Government at Claremont McKenna College. He is a co-author of “American Government and Politics: Deliberation, Democracy, and Citizenship (Cengage).” He has also written an article on organ transplants for the forthcoming reference work – “Governing America.”