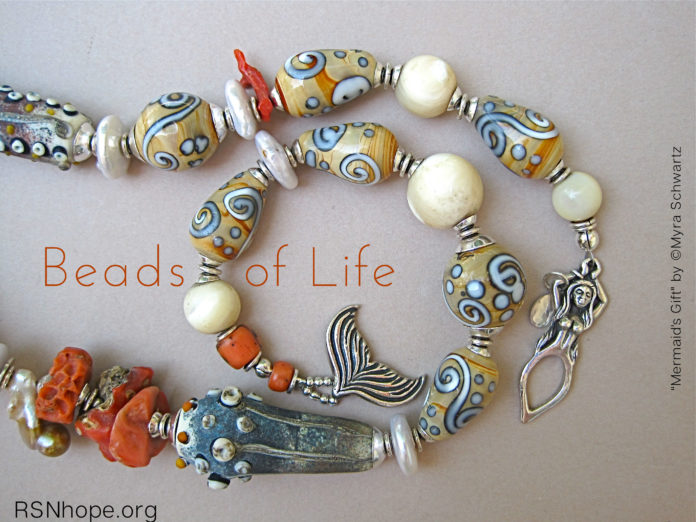 It took a medical crisis to turn my life around and help me find the work I was supposed to be doing. I call myself a beadsmith, meaning beads are the focus of my work. As an artist, I’ve worked in many creative medias over the years– photography, painting, drawing, printmaking, ceramics, quilting and soft sculpture. Each was a new learning process and each one helped to hone my design skills and sense of color in order to ultimately design and create jewelry.

The Road to Acceptance
While in college in 1970, it was discovered that I had a rare blood disorder called Light Chain Disease. I didn’t experience symptoms until 20 years later, though, when bone pain and kidney disease began to take over my body. Considered a rare form of bone marrow cancer/circulatory tumor, the disease caused my bone marrow to produce too much blood protein. I had chemotherapy for two years, but over time, the excess protein and chemo drugs slowly clogged and destroyed my kidney function. It left me with a dark cloud above my head, carrying an ominous uncertainty about life.

As symptoms developed, I became deathly ill and life became chaotic. I was in and out of hospitals with high fevers, sepsis infections, bone lesions, transfusions, biopsies and surgeries, and finally needed to start dialysis. If that wasn’t enough, I was also going through a separation and divorce. Squeezing in just a bit more misery, the company where I worked for 8 years went into bankruptcy, so I was also facing unemployment. The stress was unimaginable.

Dialysis terrified me. End Stage Renal Disease sounded like a death sentence. It felt as though I was nothing more than a disease in a self-destructing body. I went through all the significant crisis phases including denial, anger and grief. It took many months, but I gradually understood that my loss of kidney function did not and would not define me. It was a crystallizing moment and soon after, a more hopeful future began to emerge. It was acceptance.

A Love of Creating
Humor and creativity are among my strongest guiding forces. I recognized that I had an innate need to create. I wanted to breathe life into something, especially when I felt that life was being taken from me. The love of creating, using my hands, was the first activity I remember that truly brought me contentment and happiness as a child. Being an artist was ultimately what I wanted and needed to be doing. Just in case I didn’t survive the soap opera script I was living, I might as well do something that would make me happy.

The “script’ of my life could have been called “Bleak Street”. The story I was starring in, full of disease, pain, and suffering, could have won an Emmy. My life became so ridiculous that I finally had to laugh at its absurdity. And laughter had been missing from my life for a long time.

Life is filled with questions, as well as the answers, if you look for them. Sometimes you just need to delve deep to understand them. When I asked myself life’s deep questions, the answers were always right there with me. Even the root materials were there, as I remembered I had some beautiful old beads and jewelry supplies in storage since the 1970s. It seemed strange that I knew exactly where to find them, even though I hadn’t given them a thought in over 20 years. It was as if they were patiently waiting for my inevitable return. With that box of beads, I began designing jewelry, something I had only touched upon years before. I found it deeply satisfying, stress-free and peaceful. Of course, what really happened was that I redesigned my life.

I became immersed in beads and became fascinated with the lore, symbols and historic significance of these small objects. I discovered that there isn’t a culture in the history of the world that hasn’t produced, worn, or loved beads. Perhaps I was affected by the simplicity of their nature with such a complex life consuming me. They embodied time and culture — one tiny piece of the world with a hole to see through. The view became clear. It was exactly what I needed to help heal my body and spirit. In finding this new voice, I forgot my problems while working. I felt as if I had finally found my true creative “home,” and it was very exciting.

Building a Business
I formally began my business in 1991, which I called “Phases,” symbolizing a new beginning. There are now 3 lines of jewelry, including a website for kidney shaped jewelry. I receive orders from around the globe and ship special gifts for kidney recipients, donors and renal professionals. I donate a portion of each sale to patient education organizations. This year it all went to RSN. I’m thrilled to create gifts that bring meaning to many people. The website provides additional income and allows me the opportunity to make worthwhile donations.

It was the combination of life’s most stressful events rolled up together that forced me to recognize my essential self. I’ve learned that optimism and humor help open the proverbial doors when a passage seems blocked. Beading and jewelry have helped me come back to an active life that holds creativity as its essence. No longer mired down by sickness and sadness, I found balance. My life is interesting and on a path I never expected. I appreciate more and have more to give back. I now understand what it means to find and follow one’s passions.

Besides my 3 jewelry websites, I sell my work from a home showroom and studio, and display my higher end jewelry in galleries and art fairs. I also run online auctions, work as a Renal Support HOPELine phone counselor, serve on a patient advisory panel for Baxter Industries, and speak at renal educational conferences about my kidney experiences. I’ve served on my Network Board of Directors and also published articles about my experiences. I feel involved, in control and happy with my choices. Who knows where I might have been in life had I not run head on into kidney disease?

About the Author
Myra Schwartz has been active in the Chicago area renal community since 1992 when she began hemodialysis. She received a transplant from a cousin in 2002. Myra served on the Board of Directors for ESRD Network 9/10 and has been a member of the Patient Advisory Council for Baxter Industries since 1997. She has worked for RSN as a HOPEline Operator and a weKAN patient activist. A full time artist and beadsmith, you can see her jewelry designs at www.kidneyjewelry.com; www.pipedreamer.net and www.myraschwartz.com.