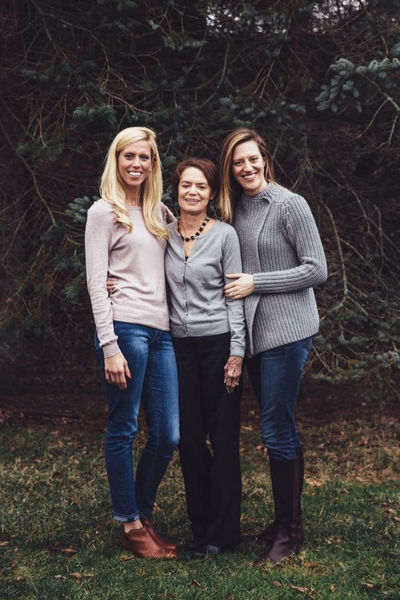 November 19th, 2011 and October 6th, 2012 were overwhelmingly joyful day for me.  These are the dates of my two daughters’ weddings, and during the celebrations I reflected on my successes in the war against my lifelong enemy—kidney disease.  Thirty-nine years before the first wedding, in the summer of 1972,  I was a scared 17-year-old who had just been told her kidneys had failed.  Unfortunately, there had been no clear warning in my case that the kidneys were failing.  One day I was a happy cheerleader looking forward to college, and the next a very sick girl who had to cancel those plans and start dialysis immediately.  I lived in upstate New York, and by the time I could get into the Cleveland Clinic for my initial dialysis treatment, I was deathly ill and probably close to dying.  Looking back, I realize that no doctor involved with my care would have given me any chance of being alive with a functioning cadaver kidney 43 years later!

The Cleveland Clinic was a critical choice for my care.  At this time, only three medical centers on the East Coast were having any success with kidney transplantation, and my doctors gave the highest rating to the Cleveland Clinic.  After a month in intensive care with peritoneal dialysis through my abdomen, the doctors placed a fistula in my arm and started me on hemodialysis.  My hospital stay for this first visit was two months, and then I was sent home to start dialysis near my home in New York.  Everything at that time associated with dialysis and transplant was an emerging science and inexact.  The dialysis machines were very large and there were no medications on the market to help improve hemoglobin levels and bone health.  The fluid pull was also more of a guessing game than it is now with more precise machines.  Maintaining quality of life after dialysis sessions was challenging for me, and many times I would go home and sleep the remainder of the day.  One thing that was consistently high quality was the love and support of the dialysis nurses. They became my biggest cheerleaders.

From the start, my doctors had encouraged me and my family to list me for a transplant. I did not have any match available to me, so I went on Cleveland’s list knowing that the success rate for a cadaver kidney at that time was about 50% viability a year after the transplant.  Still, dialysis was taking a toll on my life and my body, and I believed a transplant was the only option for the possibility of a full life.  Fortunately, my wait on dialysis was blissfully short.  After just nine months on dialysis, I got notice that a kidney was available.  The phone call came late at night, and my parents were out, so I immediately called them to give them the exciting news.  The Cleveland Clinic was six hours from my home in New York, so during the long night drive out to the Clinic, I was most worried about my dad staying awake while driving!  We made it there safely and the nurses prepped me for the operation. The prep took a little longer than the doctors had hoped because they were not happy with my blood values.  About 12 hours later, the transplant operation was complete, and I started another two-month recovery in the hospital.  I never could have imagined how many happy years this cadaver kidney would give me!

The first two years’ post-transplant were full of challenges.  At that time doctors were using prednisone and Imuran to suppress the immune system.  The levels they had me on during the early years were very high (much higher than they would ever prescribe today) and gave me many problems.  My hair began falling out, I gained some weight, and the high levels of prednisone began making me anxious.  At the same time all of these physical challenges were occurring, I was starting college and trying to manage the challenge of fitting in with my age group after the trauma of my experiences with dialysis and transplantation.  It was very difficult, and transplant support groups did not really exist to help.  I would recommend to any young person going through a transplant today that they seek out a good counselor to be a friend and advisor to help you through this life-changing experience.

Life went on. I graduated from college, started working, and seven years later met my husband.  I had done a little research and learned that there were no significant problems with children born from transplant mothers.  I took the leap and had my first daughter, Johanna, in 1983.  Johanna was born very premature, but she was blessed to not have any damage from the early birth.  Later, I found that the doctors believed the prednisone had helped her lungs develop, thus protecting her from having to be put on oxygen after her birth.  The next year, in 1984, I gave birth to our 2nd daughter, Kristina.  Very busy years followed their births.  I was working full-time as a business librarian, and going to graduate school while being a mom.  Eventually, I earned an MLIS (Masters in Library and Information Science) and an MBA (Masters in Business Administration).  As I mentioned in my introduction, both my daughters married men we love, and two years ago we become grandparents to twins Rylan and Jimmy, the joys of our lives!

I had high stamina during those years, but did experience some medical problems related to the long-term immunosuppression.  In 1988-90 I began having problems with my lungs and repeated pneumonias.  This led to my stopping the imuran, even though the transplant doctors were not happy with the decision.  Immediately, however, my lungs started to improve, and through researching this problem, I found out that there is a syndrome of pneumonia caused by this drug.  Also in 2000, I had stage 0 breast cancer and about a year later, a small tumor was discovered in my bladder.  Both of these cancers were healed without a problem.  Skin cancers have been an ongoing problem; I’ve experienced a number of squamous and basal cell carcinomas.  I go to the dermatologist every six months to monitor my skin.

My life has been a gift, given with the responsibility of managing a long-term illness with all of its consequences.  What wisdom would I pass on to other teenagers experiencing dialysis and hoping for a kidney transplant?  First, realize that transplantation is not a cure for kidney disease, it is simply a treatment for it.  A transplant requires management and discipline to make it successful.  It is very important to take your medications and to be aware of any bodily changes that you might need to discuss with your physician.  Make your pharmacist your best friend so that you know the side effects, both short and long-term, associated with taking your immunosuppresive drugs.  Second, develop strong and close relationships with your family and friends and realize that they will be your best advocates when you need someone to help you during a challenging time with your health.  A faith community can be another important support.  Having a deep spiritual life can center you and give you peace to get through the life-long battle with kidney disease.  Third, try to get listed with a transplant center that has been rated as providing high-quality care.  There are rankings available, and you want to try to be listed at a center where you know you will experience superior quality of care.  Lastly, try to manage your kidney disease, whether on dialysis or with a transplant, so that it is the background to a life filled with family, friends, and work.  The disease is not your identity and your personal aura doesn’t change because of it!

Last year my life began to once again change.  My kidney is now about 92 years old (I found out that my donor was a 49-year-old man), and it has finally died a quiet death.  I started dialysis in August, and I’m adjusting to managing my schedule around it.  After retiring from my position as a business librarian and adjunct professor, I recently took a part-time position as the director of a small library.  I’m also involved with a book club, art group, and prayer group.

At 17, I lost my kidneys and had a new life with someone else’s kidney until I was 62. I was thankful throughout for those 45 years, and I’m thankful now for the full life I still enjoy! 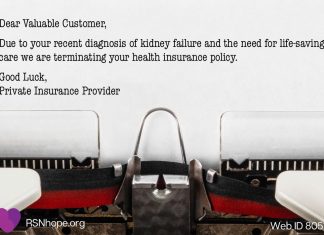