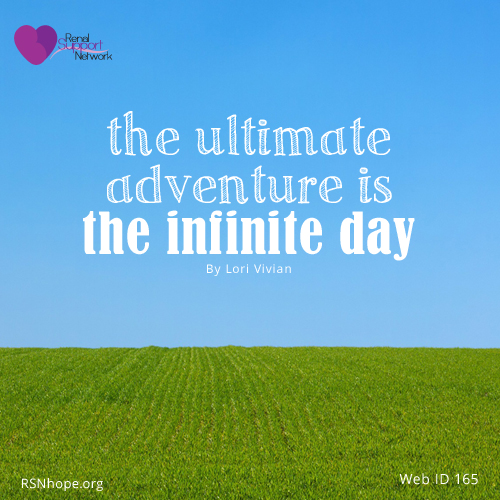 As I sit here and stare at the blank computer screen, I try to find the words that define my life now. I remember when I first became sick, and the doctor told me that I had kidney failure; I went home stunned, scared, and resigned. My friend is a registered nurse, and I looked up end-stage renal disease in one of her medical books.

I wanted to know exactly what I was facing. No secrets for me. I wanted to know exactly what the facts were. I am a person of facts, a person who believes information shall always set you free. The big official book of medical facts informed me that patients with kidney failure are defined as “marginal.” They are people with a terminal disease, who can be maintained for an indefinable amount of time with dialysis or transplant. But there is no cure, only treatment. Hence the term “marginal,” neither here nor there, but defined as somewhere in between.

I thought: “No way. I am many things, but never marginal. I either jump with both feet, or I don’t jump at all. I am not a fence sitter. I will go forth and conquer. I will be true to my nature. All I need is a plan.”

And therein lies the problem: try as I might, no plan was forthcoming. I investigated, questioned, researched, and still came up empty. I started dialysis three days a week, four hours a visit, made friends with the other “marginal ” people, learned the lingo, measured my life by liters of intake, rode the exercise bike like a hamster on a trip to nowhere, learned to get used to needles stuck in my arm like something from a bad late night movie experiment, and still no plan. One year turned into two years, and here I sit trying to define the difference in my life now.

I suppose the fact that I have no plan is a major difference. Learning to live a life without a plan, without a safety net, without a direction, without an idea of what tomorrow will be or what I plan to do has turned out to be the ultimate adventure.

Before my illness, I plotted and planned, set out to complete my goal, and, if all else failed, sheer force of will would see me through. Because I had a plan, everything all mapped out, with any and all escape routes marked in case of an emergency, not to mention the several backup plans just for good measure. I was the person who actually listened to the airline stewardess when she pointed out the exits, I read the fire escape routes that are posted on the back on hotel doors, I made lists, and always made sure the “just in cases” were covered.

Now I live everyday without the “Big Plan.” I wake up and face today, and that is the plan I live by. At first, I found it overwhelming. How does one get through the day this way? Chaos would rule, I was sure. Yet somehow, while I was walking on this undefined path that is now my life, I have found peace. Living each day as it comes, accepting what I cannot change, no longer tilting at each and every windmill that crosses my path and taking the time to see what is here and now has taken the place of the plans and lists for all the tomorrows. Chaos didn’t take over.

About the Author
Lori Vivian lives in Coeur d’Alene, ID. She is the Second Place Winner in the iKidney.com Second Annual Essay Contest entitled, “Kidney Disease–Redefining What is Important in Life.” The contest was made possible by support from Watson Pharma.