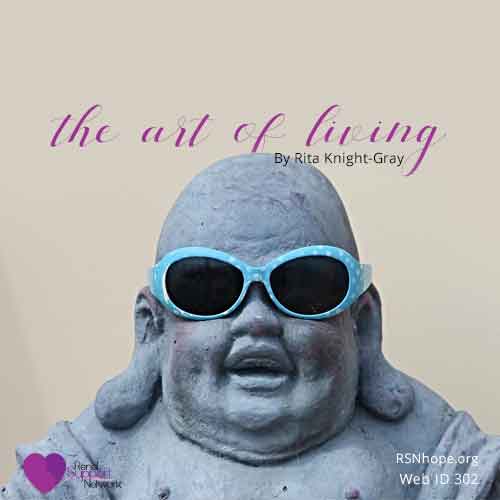 I was hit by End Stage Kidney Disease in late December, 2004. Previously I had been told that my Kidneys were operating at 50%, I still felt good even though my shoulders and neck were continually in pain and I had to adjust to my low energy level. When I went to see the doctor to see if I could alleviate my neck pain it was found from the testing of my blood that my kidneys had failed and I needed dialysis. It was the 31st of December I had tickets to a New Years Eve party but instead of going I was getting a catheter and having dialysis all in one day.   This is not how I wanted 2005 to begin there wasn’t any warning I could not believe this was happening to me, Miss Eat-Healthy-Get-Enough-Sleep-Exercise-Right-Girl.

I was in complete denial and being a Librarian I had to research my situation and find out why this happened to me. I was on my research quest for all of 2005 when I stumbled upon the Dalai Lamas book The Art of Happiness: A handbook for living. You must understand that I read for research, I’m not much of a pleasure reader being a videographer I am really into pictures. But this book has a great way of breaking down the various ways you should approach life regarding your happiness.   Even though I had become interested in Buddhism I wasn’t sure what to expect from this book. While browsing through the book the chapter on Facing Suffering grabbed my attention. Some of the Buddhist teachings had given me some insight regarding my feelings of denial but for me it wasn’t enough.

The first anecdote in the chapter was about Kisagotami a mother whose son died and she asked Buddha to bring him back to life. Buddha told her that it could be done all that was needed was mustard seeds from a house hold that did not experience any deaths.   Kisagotami searched and searched and what she found was that in every household a death had occurred. Kisagotami learned from this experience that she was not alone in the suffering of the death of someone. Buddha explained to her that any type of suffering is a part of everyone’s life. The Dalai Lama stated that his personally way of tolerating suffering is to understand Samsara, an endless cycle of life, death and rebirth, that the ordinary state of day-to-day existence is formed by our negative and positive actions. Once the negative thoughts and actions are removed the mind can achieve a state of liberation.

When I observed the various people taking dialysis, discussed with them on how their kidneys failed and what other health problems they had to contend with I found that I was not alone and that my kidney problem wasn’t that bad. Other than my failed kidneys I still had my health, I could eat most of the foods I liked, dance, travel and exercise life wasn’t bad for me it was a Samsara and by thinking positively I was able to liberate myself from the negative pain of denial.