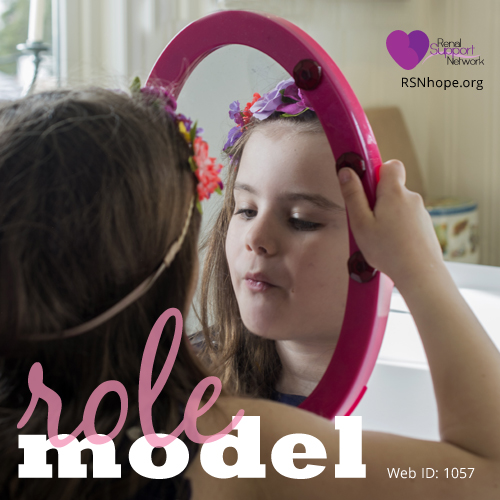 A few weeks after I started the Prednisone, I put on a lot of weight and stretch marks came with it. I still have them and they are so deep that they can’t be fixed. While other kids were able to run around in shorts and tank tops in the summer, I only wore pants and t-shirts to cover up my stretchmarks no matter how hot it was. I covered them up because I was ashamed. I covered them up because sometimes other kids talked about me. While other kids went through growth spurts, I pretty much remained the same height. But what the Prednisone did was save my life.

“A person with renal disease can be as successful as anyone else.”

Shortly thereafter, I started peritoneal dialysis. I was on dialysis for three and a half years before I received my transplant. My blood type was considered rare enough to not find a match quickly so my mother went through the process to become my donor. Eventually, I was able to find another donor and get my transplant. It was vital that I take good care of myself by taking my medications on time and by leading a healthy lifestyle. I was thirteen years old when I received my transplant. Because I was a teenager, the doctors kept stressing that I take my medications always and on time.

This year I celebrated the fifteenth anniversary of my transplant. I have never failed to take medications to this day. Over the past fifteen years my doctors changed, my medications and dosages changed, my friends changed, even my location changed. I went through these and other changes, and I learned a lot of things that I didn’t know before.

I went from a scared kid who just wanted to get better to an adult who had the perseverance to endure and graduate from law school, because I learned to never quit. I urge everyone else with chronic kidney disease to hang in there and push themselves because a person with renal disease can be as successful as anyone else. I urge them to pursue their education and careers because they are stronger than anyone else.

“I wish I had known that I would find guidance in people just like me.”

It’s been fifteen years since my transplant and what I learned is that I have more mental strength than anyone else I know. I know now to not be ashamed, but to be comfortable with my body. As a result of my kidney disease, I was able to make real friends who understand me. I grew up learning discipline because of the diagnosis I received so early in my lifetime and the daily routines I follow. What I know now is that I grew up to become a person who feels things very deeply. I learned to be kind and understanding. I learned to lead a healthy lifestyle. I grew up and learned to open my eyes and see the world. What I wish for my younger self is to have the current me as a role model.

Ishrat Riya Khan celebrated her 15th transplant anniversary on March 30, 2016. She has recently graduated with her law degree and is currently pursuing an LL.M. degree in International Law. She loves her dog, cooking, traveling, and photography. Her personal motto is to never give up no matter what.