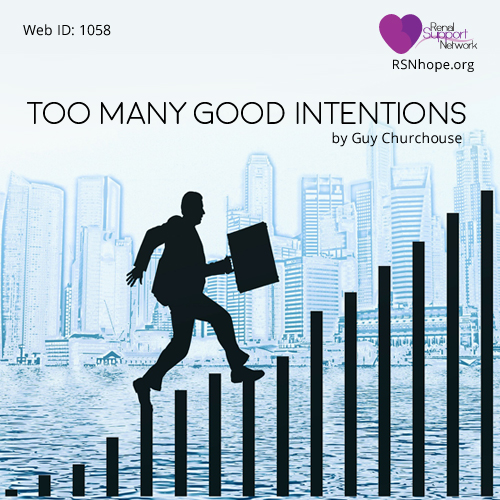 “Certainly, few of us would intentionally live our lives in a way that might cause kidney failure. Many otherwise rational people, however, find it hard to do what is best for their health rather than what they are used to doing—or what they would prefer to do.”

― Walter A. Hunt, Kidney Disease: A Guide for Living

Yes, I really did intend to live right, and be healthy. But, we all know the famous road that is paved with good intentions. Now, I am in hemodialysis three days each week and expect to be so for the rest of my life.

Many years ago, I was diagnosed with Type 2 Diabetes. The first test I recall consisted of a fasting blood draw followed by a “good” breakfast (including pancakes and hash browns) and then more blood in a couple of hours. Every few months I had another test. The results were never good.

Yes, it was diabetes, and in a few years I was insulin dependent.

The doctor’s staff educated me about my disease and warned me about risks such as possible amputations and blindness. I’m not sure if I was warned about kidney disease at first. I probably was warned, but I was young and strong… I didn’t need to worry about any stinking kidney disease.

Yes, I was relatively young, strong and a complete workaholic. I knew I was invincible. I could eat whatever I wanted. And, I wanted a lot!

And, to create the perfect storm, I had High Blood Pressure (not well controlled).

Sometime later, I was diagnosed with Stage 1 Kidney Disease. No big deal: I was too busy becoming successful.

Not only was I young and strong, I was super-motivated. I was a motivation junkie. I took all the courses, read all the books and did all those special things – visualizations, affirmations, vision boards etc. All of it was for achievement, business success and the like. I read Think and Grow Rich at least once every year. And yet, my diabetes, high blood pressure and kidney disease condition didn’t make it to my high priority list. My mind was so full of “success thoughts” that I didn’t allow room for thoughts about my health, diabetes and worsening kidney disease.

What was I thinking?

I was a goal setter par excellence! In fact, I set many, many goals – write a book, become a millionaire, start a company, learn another skill, travel the world and so many more. Yes, controlling my diabetes made the list, but nowhere near the top. Although healthy living (including controlling my diabetes and high blood pressure) was on my mammoth goal list, I never really did much of anything about it. I was too busy climbing the ladder of success, or so I thought.

I started each day reviewing and modifying my huge list of goals. It was exhausting. The planning process itself was so very time consuming that I often felt too tired to do anything about achieving my goals.

What I now know about CKD (Chronic Kidney Disease) that I wish I had known, really known, when I was diagnosed is that CKD is progressive, pernicious, and deadly – although treatable by transplant or dialysis.

If I had just paid attention to caring for my diabetes and high blood pressure like my doctors kept telling me, I could have delayed or maybe even prevented my life-long dialysis treatment.

Of course it is solely my fault, not anyone else’s. But I have discovered something that might just help others like me. Those who are super multiple goal-oriented, supremely success motivated for many objectives, and consumed with trying to achieve too much at the cost of what is truly important, should heed this finding:

Your health is the most important thing you have, and it deserves your best intention. Don’t lose it while pursuing all the other things you want out of life. 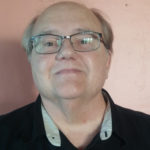