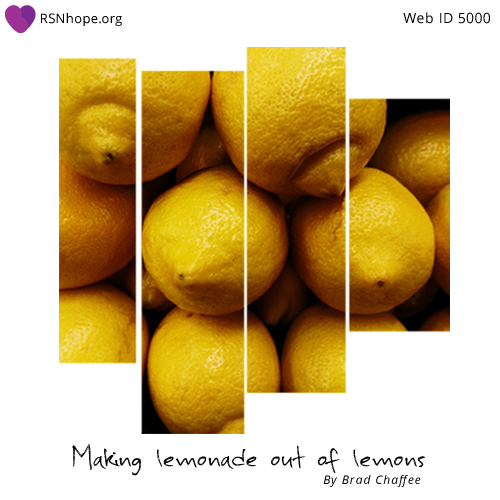 “I’m afraid it’s time for your husband to start dialysis!”, the doctor declared. The room fell silent as the news percolated in our heads. The expression on my wife’s face dropped like a sad puppy dog, and she became teary-eyed. It was clear she was having a hard time with this new reality. She took it much harder than I expected, and it was crushing to witness. As the day went on, she broke down crying many times at work. It had been almost 4 years since I was diagnosed with Polycystic Kidney Disease. We knew this day would come, but it’s hard to comprehend the severity of such a horrible disease until it begins to impact your life. Quite honestly, watching the fear in my wife’s eyes was 100 times harder than my new diagnosis. I couldn’t help feeling personally responsible for her pain even though I didn’t cause it. I wondered how to ease her troubled heart as we began to navigate the sure-to-be bumpy road that was end stage renal failure.

“it hit me like the sweet aroma of grandma’s homemade cookies. There was nothing I could do to change my circumstances, but I could do everything in my power to make the very best of things”

I felt completely helpless, especially since I wasn’t even sure what to expect myself. I was scared and facing my own fears as a result. I knew my life would look different, but to what degree? I had no clue. I did know that I needed to be strong for my family’s sake. Then it hit me, like the sweet aroma of grandma’s homemade cookies. There was nothing I could do to change my circumstances, but I could do everything in my power to make the very best of things. In that moment, I decided to embrace an idea that had been completely foreign to me. I was going to “make lemonade out of lemons”. I had heard the adage many times in my life, but I never thought it applied to me until that moment. I was going to seek out the positive in every struggle I faced, which was going to be challenging since my tendency to always spot the negative was second nature. It was time to turn over a new leaf. I wasn’t sure I was capable of such a thing, but I knew I had to try.

As suspected, 10 hours a night on dialysis proved to be quite a trial. Fatigue, nausea, vomiting, and severe muscle cramps, among other symptoms, tested my resolve. It certainly made it more difficult for me to make the best of my situation. However, my determination was strong, and I pushed through for my family. No matter what happened, I tried not to complain. I reminded myself that regardless of the struggles I was facing, there was always someone else who had it worse. That’s not to say I didn’t sometimes succumb to negative feelings about my situation, but what was fascinating was that my new outlook seemed to help me come around much faster. It also helped that I surrounded myself with positive and uplifting people that I could turn to for support and encouragement. Little did I know, my decision to be positive had a profound impact in ways I didn’t expect.

“Avoiding victimhood and keeping that mindset from infecting all aspects of my life was paramount. I was going through something that is known to cause depression, and I thrived despite it”

I initially made the decision because I was concerned about my family, but as time passed I realized it literally changed me as a person. I transformed from a devout pessimist to someone that went out of my way to see the positive in everything I faced. It not only helped me appreciate my blessings, it also helped me cope with PKD and all of its terrible symptoms. It became, quite literally, the best decision I ever made concerning my health. Avoiding victimhood and keeping that mindset from infecting all aspects of my life was paramount. I was going through something that is known to cause depression, and I thrived despite it. As a result, my stress levels were substantially lower, and I was motivated to exercise, which introduced me to a sport I now love called pickleball. I lost 54 pounds in 9 months which helped me become a better candidate for transplant! On March 2, 2017, I had that kidney transplant and felt victorious.

Life certainly pummeled me with lemons, but instead of allowing the situation to sour my disposition, I made the best lemonade I could, and it most certainly paid off.

Brad Chaffee is happily married with 4 beautiful children that he adores. After receiving his kidney transplant, he hit the ground running and quickly enrolled in college to pursue a degree in cybersecuriity. He eagerly returned to the Pickleball courts and plays obsessively. His fondest memory is the time his 5-year-old daughter came into his room and said, “Daddy, I love your new kidney!”