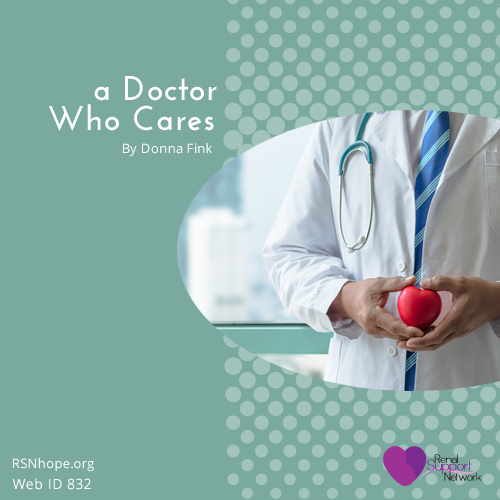 In the 12 years that I’ve been dealing with chronic renal failure, I’ve come to know many health care professionals. One in particular stands out, a nephrologist and the director of the dialysis center where I was being treated.

When I first met him, he wasn’t my personal physician. I’d been experiencing severe back pain for several weeks; I started falling down and couldn’t get up. I was 53 years old and certainly didn’t expect to be having those kinds of physical problems. After mentioning my back pain to my doctor and others at the dialysis center, I was told that the facility was getting new chairs that should make my back feel better. I thought that something more than an uncomfortable chair was the problem, but I didn’t know what else to do.

The director walked into the center one day just as I was leaving. I asked if I could have a moment of his time because I had a question and needed help. Even though I wasn’t his patient, he took the time to listen to my concerns and took them seriously. He immediately called and arranged for a bone scan and an MRI. After I had the tests, he called to tell me that I had a staph infection that had settled in my spine. The infection, along with the effects of dialysis, had caused my spine to collapse, and it was pinching my spinal cord.

The fact that he stopped to listen to me that day literally saved my life. I spent 4 months on intravenous antibiotics before I underwent surgery. The surgeon discovered that thoracic vertebrae T4 through T9 had collapsed, and T6 and T7 had to be removed entirely and replaced with a cage. The remainder of my damaged spine was supported with rods. Within 2 weeks after I started rehabilitation, the wound got infected, and I had to face yet another surgery.

What I haven’t said is that this doctor—the nephrologist and dialysis center director—followed my care as if I were his patient. After I had the second surgery, where they removed the necrotic tissue and resutured the incision, I couldn’t walk. My husband was told to put me in a nursing home because I wouldn’t get better and would probably die. My husband didn’t listen and located a hospital that not only had an excellent rehabilitation facility, but could perform dialysis for me as well.

After months of rehabilitation, I was once again able to walk. I’m neither fast nor able to handle steps very well, but at least I’m vertical. If it hadn’t been for the kindness shown to me by that doctor, I probably wouldn’t be here.

I should mention another incident involving this same doctor. One day he was the attending physician at the hospital where I was a patient and had just paid me a visit. When he got ready to leave, I went to the door with him, intending to walk the corridors for my daily exercise. After he said goodbye, he slung his white coat over his shoulder and leisurely strolled past the nurses station, obviously ready to go home to his family. I noticed that he backed up a few steps and directed his attention to a patient who appeared to be in distress in a room a few doors down from mine. He stopped to ask a nurse whether she needed him to help. This person was also not his patient, but he took the time to ask whether his help was needed. You don’t find many kind, compassionate, and caring physicians like him.

I told him the next time I saw him what I’d observed and that I would never forget the kindness he’d shown to me and to others as well. He eventually did become my physician, and I’m so grateful to him for helping me when it seemed that no one else would.

I know that there are other health care professionals who are just as thoughtful and kind. To all of them, I’d like to say a very sincere thank you. It’s because of people like them that lives have been saved or at least made better.

About the Author
Donna was born in 1954 in Oklahoma City with a congenital defect which was not diagnosed until 1984 and which eventually caused her kidneys to fail. Donna received a transplant in 2001 which ended up being rejected after 5 years. She is now back on dialysis and continues to live with her husband of 28 years. Donna keeps busy by volunteering at the airport in Oklahoma City and is a substitute teacher for middle and high school students. Donna always tries to encourage everyone she meets to “do something they might find interesting and to stay active.”