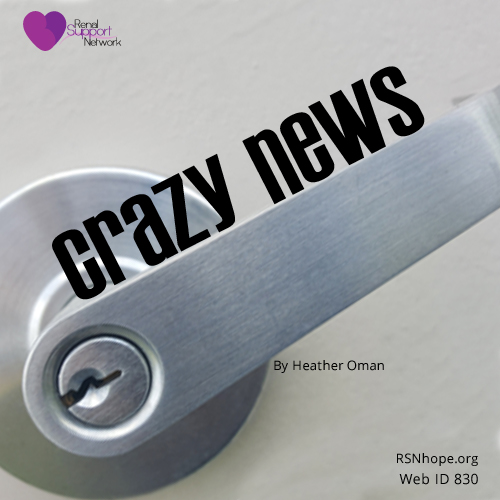 It’s called the doorknob question. You know, the doctor finishes examining a patient, stands up to end the visit, and, hand on the doorknob, says, “Is there anything else?” The patient sees this as her last opportunity to get more medical advice and tells the doctor that even though she came in for a hangnail, she actually has had chronic diarrhea for a month and pain in the joints and halitosis on Tuesdays, and is there anything the doctor can do about this funny-looking mole?

But I’ll forever be grateful to the doctor who did the doorknob act after he finished examining my sore throat. He opened the door even before he paused and asked, “Is there anything else?” My sister had been bugging me about my odd symptoms, telling me that I needed to ask the doctor about the pain and numbness I was experiencing. I decided that this was my chance to get my sister off my back. I cleared my throat.

“So, well, heh, it’s kinda silly, but I’ve had numb toes for, you know, a while, and then sometimes my back and side hurt, and, ha ha, my sister said that I had to tell you because she says it’s not normal, but I told her that it’s nothing to worry about, right?”

The doctor shut the door and said, “Wait, WHAT?”

He examined my toes, my legs, and my back; pricked my finger to test for diabetes; and moved my legs up and down, asking where it hurt. He took X-rays, made notes, and told me that he thought I might have a spinal tumor. He ordered an MRI, and I left his office, shell shocked. I’d gone in because I had a sore throat and now I was leaving to get an MRI!?

I was even more shocked when he called after the MRI to tell me that I had advanced polycystic kidney disease. The pain in my back was caused by my enlarged kidneys, and the numbness was due to pressure on my spinal nerves. But I liked the way he broke the news to me. He was calm and compassionate. At the end of the conversation, after we’d set up appointments and medication and taken that first step on the road to dealing with a chronic illness, he said, “Sorry about the crazy news. I know this wasn’t what you expected.”

He acknowledged that what he was telling me was crazy, surreal, impossible. It was this small act that made me laugh. I laughed again, feeling a little crazy myself. I said, “Exactly who expects to be diagnosed with polycystic kidney disease?” We laughed together. And his kindness and competence reassured me that, somehow, I’d figure all of this out.

It’s been almost 7 years since that phone call, and I’ve seen at least half a dozen more doctors. Some of them have had that same compassion, but I feel like nobody has treated me as well as the man who diagnosed me, who made me feel like my disease was crazy, but manageable. To be honest, I don’t even remember his name. I doubt that he works in the same practice any more. For all I know, he could have moved to another city altogether.

But wherever he is, I’m sure that he’s still treating patients with compassion, even as he acknowledges that the road they face will be hard.

And I’ll bet that he still hates the doorknob question.

About the Author
Heather Oman, 37, has been living with PKD since January 2006.  She is the first in her family to be diagnosed with PKD, although it has been determined she inherited it from her father, who is asymptomatic.  She graduated from Boston University with a BS in communication disorders, and has an MA from The George Washington University in Speech Language Pathology.  She is a certified Speech Language Pathologist, but spends most of her time these days making sure her own two children say please and thank you.  She discovered early on in her diagnosis that regular exercise helps relieve her kidney pain, and has since become an avid runner. She has been a contributing columnist to PKD Progress, a quarterly magazine for PKD patients and their families, and she maintains the PKD blog “Living With PKD; a blog about PKD, motherhood, and the dog.” She lives in Virginia with her family. You can find her at www.livingwithpkd.blogspot.com