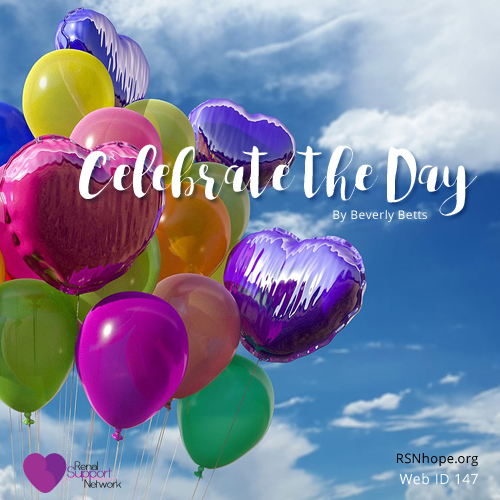 I believe hope is where you find it, begging to be renewed. Hope regained is even more precious because you know the value of its loss. There is a certain relief that hope gives–a comfort in the knowledge that there is an end. I hope because I lost it once, and I know the dark place the world is without it.

I remember the day I lost hope. It was June 15, 2000. This day came after going to doctor after doctor for over 18 months. All of the others couldn’t figure out what was wrong with me. Finally, someone did. It was such a relief to have someone validate my illness, to confirm that it was not in my head or because of my weight, as one doctor had told me. My relief was short-lived. This doctor told me that I had systemic lupus with nephrotic syndrome and that, because of it, my kidneys were failing.

After finding out what that meant, I asked what could he do to fix me. Much to my surprise, he told me that he could not fix me. He said that I would need dialysis sometime in the next five years and would probably live another 20 years before the disease became terminal. While he said this in much the same detached tone as you would tell someone what time it was, I froze.

The person I used to be died in that instant. I functioned on auto-pilot, living from day to day for next three years. During this time I was half-living. I didn’t look forward to anything. Nothing excited me. Even food didn’t taste the same. I never made plans. I just got through the day with the least amount of thought or effort.

Though I continued school to finish my BA in December 2000, the dreams of a grand future as a profiler were shattered. I had a plan that did not include being sick, and I felt powerless to revise it. I pretended to be OK, coping with the illness, but I was not. While my body had gone on, my mind was still sitting on the doctor’s table with his voice saying “20 years” echoing in my ears. I had wanted to tell him that wasn’t enough time for my plan, but what could he do about that? Family and friends tried to be supportive, but they can’t really understand. The grief I felt at what I had termed to be the loss of the life I had planned was inexplicable. So, I just flipped on auto-pilot and slapped on a smile rather than trying to explain it. That seemed easier somehow.

Days turned into weeks, weeks into months, and months into three years. In March of 2003, following a bad flare-up, my kidneys failed. The doctor told me I needed to get dialysis. When he explained I’d have to have a tube in my neck, I went off. I refused further treatment and left the hospital.

I went home, and my son asked me: “Mommy, are you all better now?” When I looked into his eyes and saw the hope there, something inside me clicked back on. I knew then that I had to fight and to win against this illness. I had to win for Ian, my little boy. I couldn’t let the light in his eyes die.

From that moment forward, I had a renewed purpose. It was to live the life I had been given–when life gives you lemons, make lemonade. I know it sounds cliché, but it so true.

The first step was to regain control. I had been letting others make decisions for me because I simply didn’t care anymore. When I returned to the hospital, I questioned the doctor for the first time in three years, asking him my options. I was empowered by the simple act of engaging in my own care. I didn’t feel powerless anymore.

The next step was to look outside myself. I had to let go of the past in order to conceive of a future. When I went to dialysis, I saw real sickness. This made me realize that things could be much worse. It also made me realize the needs of others.

I taught my son to read. Then I took him to a nursing home to volunteer with me as a reader for the residents. I got a sense of accomplishment greater than any I had ever experienced. I was hooked. I became active in church again and joined several ministries. I volunteered for local politicians. I did anything to fill up those hours, days, and weeks that became my life.

Next, I started to set goals for the future. Before that, I felt that my future was gone, but now I know that my future is now. I realize that I should enjoy the life I was given for the time that I have it instead of squandering it on regrets.

I am currently on the waiting list for a kidney and hoping to get it one day soon. Until then, I have started my own business where I work from home. Now, I look forward to traveling and taking short trips. I plan to have a big blowout in Las Vegas for my 30th birthday in November.

Lastly, I celebrate the day. I cherish each day that I am feeling reasonably well, each occasion spent with my family and friends. I have parties every holiday, even the little ones like Cinco de Mayo or St. Patrick’s Day. On the day after Thanksgiving, I cook again and call it Thanksgiving 2. I tell my family and friends that I love them each time I see them. I kiss my son awake each morning and put him to bed each night with a kiss.

About the Author
Beverly Betts lives in Chicago, Illinois.