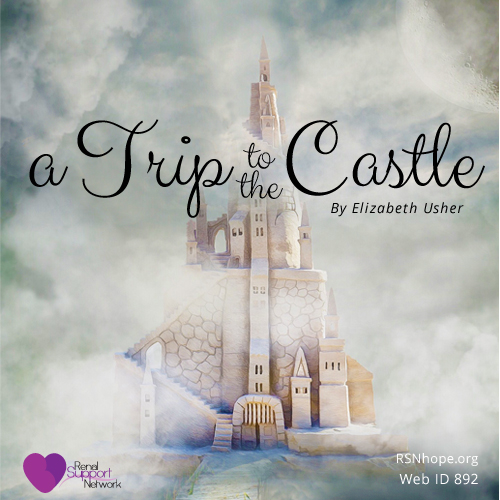 Once upon a time, there was a maiden named Lizabetta, who lived in the hamlet of Dialysisa in the shire of Healthia with her dog, Liebkin. She’d been cursed with a disease that made her legs swell, her eyes blur, and her spirits plummet. She talked to a traveling apothecary, who advised her to go to the castle for treatment.

One day she finally decided to travel to the castle, many miles away. She patted Liebkin good-bye and took her basket of cheese and bread. Shutting the door to her thatched cottage, Lizabetta took out a map of the shire and began her journey to seek wellness.

Soon she came to the River Hope, where she saw three trolls standing on a cobblestone bridge. There was a large “P” printed on two of their tunics and a large “S” on the third one.

“What do these letters mean?” she asked.

“They stand for potassium, phosphorus, and salt,” the trolls answered in three-part harmony. “Eat foods with lots of potassium,” said the one with the bowl-cut hairdo.

“Eat foods with lots of phosphorus,” said the second troll with the bald pate and frizzy side hair.

“Yuk, yuk,” the bald, fat third troll chirped. “Eat foods with lots of salt.”
The trio then gave her more cheese, potatoes, and other starchy vegetables, as well as a little block of salt.

“Hmm, those trolls somehow look familiar,” she said to herself. Later, she sat down on a bright blue mushroom to rest. The woods were still except for the occasional birdsong in the yew trees. Suddenly, she heard a loud “burp.” Turning around, Lizabetta saw a huge, one-eyed ogre staring at her.

“Who are you?” queried the maiden.

“Yorick, milady,” he replied. “Would you care for some water?”

“Yes, thank you. I’m rather parched,” replied the maiden.

“Here’s the Well of Endless Water. Drink as much as you like, and you’ll feel better,” he said and smiled slyly.

Once inside, she saw that there were people lying in long hammocks and hooked up to machines and tubes. The Wizard did tests and more tests, and then he hooked Lizabetta to a contraption to clean her blood of its poisons.

He explained to her that she needed to take care of herself: she should avoid foods with high levels of potassium, phosphorus, and salt. She needed to exercise and to watch her fluid intake. “Don’t drink too much water because your body can’t handle it,” he said.

“Oh, Sir Wizard, I hadn’t realized that! The trolls…the ogre…they were wrong. I don’t want to get any worse! I’ll take your advice. I’m going to watch carefully what I eat and drink from now on.” Lizabetta was determined. “I’m going to become an active participant in my own care!”

The Wizard nodded. “You also must eat lots of protein, such as meat and eggs.” He then added, “And be sure to return thrice weekly for treatment.”

She vowed that she would, said good-bye, and began the journey back to her home.

On the way back, she ran into the ogre by the well. Taking only two sips of water, she confronted him with her new knowledge. Later, coming upon the three trolls, she told them what the Wizard had said. As they stammered guiltily, she exclaimed, “Oh, you’re just three stooges!”

Once she got home, she and Liebkin walked to the farmers market to buy eggs, beef, and pork for protein, and some non-starchy vegetables, except for one lone potato.

Lizabetta had learned at the castle that she needed to be the heroine of her own story by taking charge. She’d have to be an active player in her theater of life. Because of this, she lived happily and healthily ever after.

About the Author
Elizabeth Howard Usher taught English at Lakewood High School as well as Harding Middle School in Lakewood, Ohio for thirty-one years.  She graduated from Linden Hall School in Lititz, Pennsylvania; Pine Manor College, and Western College. During her teaching career, she was named Teacher of the Year in 1984 and Educator of the Year in 1998.  She is named in both Who’s Who in American Teachers and Who’s Who in American Women.  She has diabetes and has been on dialysis since July of 2010. In her spare time she is part of a MENSA consulting group for advertisers and she loves cartooning, oil painting, playing the violin, and writing short stories and poems. She is presently working on a novel about Ruthin, Wales, a mystery.