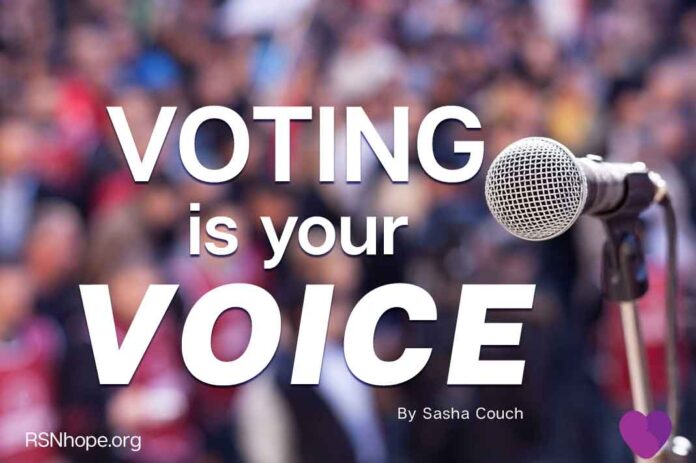 Do you want to have a positive impact on your community and on your country? There’s an easy way to do it. It’s by casting your vote!

By voting, you gain the power to decide the quality of life you want for yourself and for future generations. Regardless of what side you are on, if you don’t vote you’re letting others decide for you. Voters are engaged citizens who actively participate in the world around them. They are more likely to talk to elected officials and advocate for themselves and their families. It is something RSN’s founder, Lori Hartwell, believes in and why she maintains relationships with her representatives. Election Day is November 3, so your chance to have your say is right around the corner!

Our daily lives are connected to those who hold office because that’s how decisions that affect our lives are made. Beyond electing presidents, we elect state representatives to Congress. We also vote for governors, mayors, secretaries of state, attorneys general, city council members, judges, and others. Elected officials decide a whole host of things, like where your tax money goes. They decide how much of your money is used to maintain schools and roads. They also make decisions about the safety of your water supply; the approval of new drugs and drug trials; and whether or not to prioritize your healthcare and social services. And that’s just the short list! What’s more important than that?! We often see local judges on ballots. Many people skip voting for them believing they don’t know enough, or don’t understand how it relates to them. Judges and courts are there to ensure the fair, impartial, and independent administration of justice. They’re responsible for everything from car accidents and divorces, to medical malpractice issues. Take time to learn about all the candidates and ballot measures in your area.

If you or someone you love has a health condition like kidney disease, you should be even more concerned with making your voice heard. RSN looks at legislation related to kidney disease because of the direct impact it has on insurance, cost-of-living, and the general quality of life for people with chronic kidney disease. We must protect our rights and needs, especially when related to dialysis or the rising costs of medication and care. Seek out candidates who have a positive record on protecting people with disabilities and their healthcare rights. Many kidney patients rely on Medicare, a federal program, to cover dialysis treatment. Medicaid and Medi-Cal are state programs, so your state representatives have a major role in shaping how those programs work and who they cover. Many people living with ESRD rely on these programs, and drastic cuts could have significant impacts.

Too many times people with chronic illnesses and disabilities do not vote. There is a term for it. It’s called the “disability gap” and it accounts for the millions of non-voters who fall into this category. This is one reason why Vote-by-Mail (VBM) is a great option for many of these voters. If you are disabled and you do vote in person, you are entitled to a safe and accessible polling place with facilities and voting machines to accommodate you. Check the ADA website for all the protections you are entitled to from voter registration to election day.

VBM has been in the news a lot lately. It’s not always easy for people on dialysis to vote, or for those unable to drive, and VBM offers a safe and secure option. Let’s first talk about the terms associated with Vote by Mail:

First, understand that Absentee Voting and Mail-in Voting are the same. It is simply a matter of semantics. Different states use different terms, but it is a method of delivering ballots by mail to voters. The important thing is that all mailed votes are verified before they are counted.

Absentee Ballot
This vote-by-mail ballot is submitted by someone who can’t be physically present at a polling place on Election Day. This practice has been instituted since the Civil War to enable the military, people living overseas, and others who fit the criteria to vote (E.G., having a disability, performing jury duty, etc.).

No-excuse Absentee Ballot
This is the same thing as an absentee ballot. The only difference is that you can request and be granted one without a reason. Due to Covid-19 it’s possible that all states will waive the need for an excuse for the November election, but as of today 29 states allow it.

Mail-in Ballot
This applies to voters who receive a mail-in ballot that is sent to them prior to the election. The ballot can be mailed back, or dropped off at a polling location on Election Day or into a secured drop box within the dates permitted by their state. RSN is based in California, which is a state where every registered voter receives a mail-in ballot.

Check the rules in your state for date information and to be certain all requirements are met (such as signing your envelope, or when someone else is dropping off your ballot, etc.). It is possible more people could and would vote if voting by mail was the norm and not the exception.

Party
The Democrat (left) and Republican (right) parties are the two main parties here in the United States. The Independent party is centered, and it is growing in number. Libertarians and Green Party members also have a presence on the ballot. Declaring a party affiliation is required only when voting in closed primaries. Primaries are important if you want to have a say in who represents your party in the general election.

General Elections
What:  This is when political candidates are directly elected to office. Voters also choose federal, state, and local representatives, and decide whether or not to pass ballot initiatives

When:        Every four years in November on the first Tuesday of the month

Federal Offices: Congressional seats – US Senate and House of Representatives

Primary Elections
What:  Primary elections determine the candidate for each political party prior to the general election

When: The process usually starts in late January or early February. The day varies by state

Open:  Everyone can vote for the candidate of their choice, with or without a party affiliation

Closed primaries: To vote, you must be registered to that party

Semi-closed:       Non-partisan voters can choose the primary in which they wish to participate

People living with kidney disease, as well as their family members, should keep up with kidney legislation. It can take years from the point legislation is introduced to when it gets passed – if it gets passed! The public can access the status of legislation by going to www.congress.gov. Advocate for your interests by reminding your senators and congresspeople to check on them too. In a new election year, bills are no longer viable and they must be reintroduced. It can take years to get a bill passed so don’t be discouraged if one has to be reintroduced.

Below are some pieces of legislation to watch. For more information, go to the Advocacy section of the RSN website.

If you live in California, there will be a proposition on the 2020 ballot titled, CA Proposition 23, Dialysis Clinics Requirements Initiative. RSN is opposed to this as it would seriously jeopardize access to care.

H.R.1224 – The Living Donor Protection Act of 2019 This act would protect living organ donors and promote organ donation in three ways. Organ donation saves lives and money, cuts health care costs by as much as two-thirds, and saves Medicare millions of dollars each year.

H.R.3912 – The Chronic Kidney Disease Improvement in Research and Treatment Act would allow for significant improvements in critical areas, including guaranteeing access to Medigap policies to all ESRD beneficiaries, expanding kidney care access in underserved areas, and incentivizing innovation for new drugs, biologicals, devices, and other technologies.

H.R.5534 – The Comprehensive Immunosuppressive Drug Coverage for Kidney Transplant Patients Act of 2019 would extend immunosuppressive coverage beyond the 36-month cut-off currently in place to cover immunosuppressant medications for the life of a transplant.

You do not have to vote for everything on a ballot. If your area is choosing multiple judges and you find this overwhelming, choose a few. If you don’t feel well-versed enough to vote for a district attorney, skip it. It’s your choice. But be sure to read your sample ballot (you can find it online) and research everything on it. A knowledgeable voter is a powerful voter. And remember, no one will know how you vote unless you tell them, so vote your conscience. Exercising your right to vote can be looked at as performing your civic duty. By doing so, you’ll be “doing good” work in trying to make our country better. And for that, I vote YOU the Super Awesome Citizen of 2020!

Sasha Couch is an East Coast native living in Los Angeles for over 20 years. She has a BA in International Relations from The University of Pennsylvania and works as a technical writer. Sasha received a kidney and pancreas transplant in 2017. She delights most in her volunteer endeavors, notably working with organizations helping the homeless like the Culver-Palms Burrito Project.

Voting Is Your Voice

Vote No on Prop 8 – A Wolf In Sheep’s Clothing