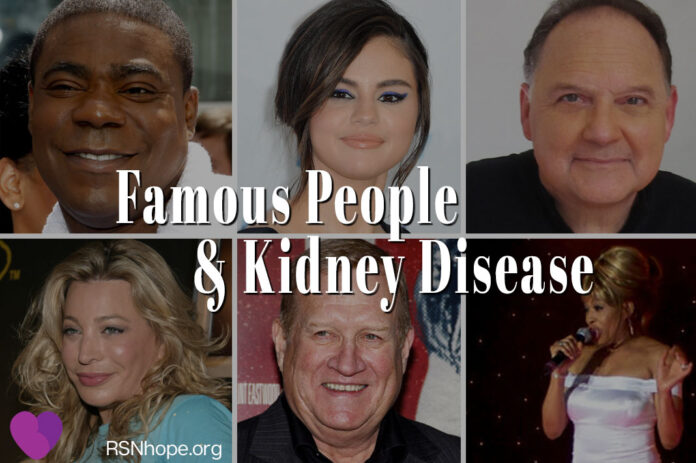 Did you know that there are many famous people who have kidney disease or have donated a kidney? It shouldn’t be a huge surprise since chronic kidney disease (CKD) affects people all over the United States. The leading causes are diabetes and high blood pressure, however there are many genetic underlying diseases that can cause the kidneys to fail as well. More than 1 in 7, that is 15% of US adults or 37 million people, are estimated to have CKD.

You may recognize some people on this list and you might be surprised to learn that they too have CKD. Many chose not to speak publicly about their illness because they know as we do, that CKD does not define us. There are also those who do speak out as a means of raising awareness about kidney disease and to encourage hope in others by example. Knowing that there are others walking in our shoes, including famous people, can help us to know that we are not alone in this journey.

In addition, something that we think is really special, are famous people who are also kidney donors. Check out this list and see if any of your favorite actors, music artists or athletes are on the list of kidney donors.

Famous People Who Have Kidney Disease

Reginald Ballard The actor and writer, known for the films Horrible Bosses, Menace II Society and the TV hits Martin and The Bernie Mac Show received a kidney when his wife donated a kidney in a kidney swap in December of 2020.

Nick Cannon The singer, actor, and Masked Singer host suffers from lupus nephritis. Lupus is an autoimmune disease that can affect any part of the body, such as joints, kidneys, and lungs.

Grisswald Chapman Actor in 30 Rock has kidney failure due to hypertension He is a transplant recipient.

Lucy Davis The actress in The UK version of The Office and Shaun of the Dead had kidney failure due to diabetes. She is a kidney transplant recipient.

Taylor Dayne is a singer with hits such as “Love Will Lead You Back,” was hospitalized at the age of four for kidney and bladder issues and had ureteral reimplantation surgery when she was just 5 years old.

Freeway The Philly-based rap musician and advocate for kidney disease awareness has kidney failure due to diabetes. He is a kidney transplant recipient.

Selena Gomez The singer’s kidney failure was caused by Lupus nephritis, She is a kidney transplant recipient.

Angelica Hayle The America’s Got Talent 2017 runner-up contracted a severe bacterial pneumonia, causing septic shock and multiple organ failure, including her kidneys at the age of four. She is a kidney transplant recipient. Listen to her inspiring story on RSN’s KidneyTalk Podcast.

Ed Hearn The Kansas City Royals and NY Mets baseball player has FSGS. He is a three-time transplant recipient. Listen to his KidneyTalk podcast interview here.

Sarah Hyaland The Modern Family actress was born with from kidney dysplasia. She is a kidney transplant recipient.

Donald Jones The former Bills and Patriots football player has IgA nephropathy, an auto-immune disease affecting the kidneys. He received a kidney from his father and continued playing post-transplant until he retired in 2013. He is the author of the book, The Next Quarter: Scoring against kidney disease Kindle Edition.

George Lopez The comedian also has a hereditary kidney disease. He received a kidney transplant from his ex-wife, Ann Serrano Lopez.

Scott MacIntyre was a American Idol Finalist, he is an Author & Transplant Recipient. His song “I am Hope” has become an anthem for organ donation. Watch a video about his story.

Aries Merritt The Olympic hurdler has a rare congenital kidney disease. She is a transplant recipient.

Tracy Morgan The comedian and actor best known for 30 Rock has kidney failure due to diabetes. He is a kidney transplant recipient who thanked his living kidney donor while talking to reporters on the red carpet of the 2011 SAG Awards.

Marco Pennette The Emmy winning producer and writer’s television show B-Postive was inspired by his own journey to receiving a kidney transplant.

Amy Purdy The snowboarding champion and actress’ kidneys failed two years after hospitalization for septic shock. Both of her legs had to be amputated below the knee. Both kidneys, and her spleen had to be removed. She received a kidney from her father.

Bobby Rydell  The singer and 1960’s teem idol has kidney failure caused by liver disease. He is a kidney transplant recipient.

Clyde Simms The pro soccer player was diagnosed with FSGS while he was in high school but still managed to have a nine-season career in the MLS. He is a kidney transplant recipient.

Tina Turner The legendary singer announced that she had kidney disease and that she was in recovery from kidney transplant surgery in 2018. Her new kidney was donated by her husband Erwin Bach.

Dayna Stephens The jazz saxophonist has FSGS. He is a kidney transplant recipient.

Stevie  Wonder The legendary Motown performer made the announcement in July of 2019 that he would undergo kidney transplant surgery in September of that year.

Richard “Dick” Cass The NFL Ravens president donated a kidney to a friend in 2006.

Senator Jake Garn The first U.S. Senator to go into space donated a kidney to his daughter who suffered from diabetes and kidney failure.

Francia Raísa is an American actress known for the TV shows Bring It On: All or Nothing, and The Secret Life of the American Teenager, and Grown-ish  also famously donated a kidney to her BFF Selena Gomez.

Oscar Robertson The retired NBA player donated a kidney to his daughter in 1997.

Ann Serrano The producer and actress donated her kidney to her then husband George Lopez in 2005. Ann is good friend of RSN Founder and President Lori Hartwell. She has donated her time as an Emcee for the annual Beat the Odds Poker Tournament and the Online Celebrity Charity Bingo event. Her daugther Mayan hosted RSN’s first online prom in 2020 with the theme Game Night.

Everson Walls The retired NFL player donated a kidney to his Dallas Cowboys teammate Ron Springs in 2007. He documented his experience in the book A Gift For Ron.

Natalie Cole The singer had kidney failure after treatment for hepatitis C. She was a kidney transplant recipient. Her living kidney donor was a fan. She passed away in 2016 from a rare lung disease that led to heart failure.

Aron Eisenberg The actor in Star Trek: Deep Space Nine was born with one partially functioning kidney. He was a kidney transplant recipient. Aron passed away from heart failure in 2019

Stephen Furst The comedian, actor and producer was a good friend of RSN Founder and President Lori Hartwell. He co-Hosted RSN’s KidneyTalk podcast, which launched in 2006. Stephen passed away in 2017 from diabetic complications. Read RSN’s memorial post about Stephen here.

Jon-Erik Hexum the actor, died on the set of the CBS series “Cover Up” in 1984. He donated his Heart, kidneys, corneas, and his skin.

Ken Howard Best known for the 1970’s television show The White Shadow, Ken’s kidney failure was caused by a misdiagnosed blockage. He was a transplant recipient. He passed away in 2016 from pneumonia complicated by shingles. and prostate cancer

Paul Hutchins The Green Bay Packers football player had FSGS and was a kidney transplant recipient. He was killed in a car accident in 2017.

Neil Simon The playwright had Polycystic Kidney Disease and received a kidney transplant from his publicist in 2004. He passed away in from kidney failure complicated by Alzheimer’s and dementia.

Holiday Gift Ideas for People who have Kidney Disease

Medicare or Other Health Plans for People who have Kidney Disease