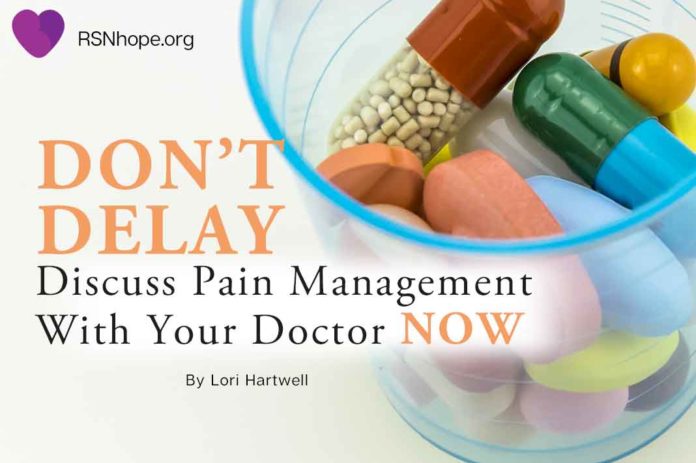 My battle with chronic pain has been going on for decades. One ache turned into two, two aches into three, and so on. Managing my pain is my key to living the life I want.

Over the years, I kept pain at bay with physical therapy, medicated creams, meditation, injections, chiropractic care, massages, orthotics, surgery and medications. I relied on medication as a way to get moving—to get up and through my list of things to do. Tylenol was my first choice, as it is a non-steroidal medication and isn’t harmful to my kidney transplant. However, on occasion, when my pain was more severe, I needed opioids to control it.

Today, we are learning a lot about the risks of pain medication, especially opioids. Anyone who takes opioids is at risk of developing an addiction. Opioids trigger the release of endorphins that stifle the perception of pain and create a temporary sense of well-being. But it’s back to square one feeling pain again when the drug wears off.

Earlier this year I was hospitalized. I was anxious and in pain, and was under the care of doctors who were not familiar with me. My pulse was very high, and sleep had eluded me for a couple of days. I voiced my pain, but the words seemed to fall on deaf ears. I complained louder. I am well-aware of which medications work best for me. I often offer doctors suggestions. So, I asked for Ativan in addition to pain medication other than Tylenol.

The resident in charge of my care went through the list of medications I had been given and was perplexed by the fact that I had an opioid at home. He spoke to me as if I was an addict. I felt the need to defend myself. I told him about my ankle replacement, and stressed the level of pain it has caused me. Disappointed by his lack of sense of humor and bedside manner, I attempted to break the ice by explaining how my true addiction is arts and crafts. I let him know that the salespeople at my local Joann’s and Michael’s stores know me by name. He was not amused, nor did he empathize with me. I went on to state how I had been self-managing my illness for decades, and how I know if I don’t sleep I don’t get better. With that, he ordered Melatonin and Tylenol!

I was upset, to say the least. No other doctor had ever dismissed my input in this way. Hospital staff responded by sending a dog therapist, a social worker and multiple volunteers to my bedside. An appointment with a Reiki specialist was in the works, but the wait was long, as they were fully booked. I was game for anything. Pain and anxiety left me with feelings of depression, and my optimism for the future was languishing. I could not even get up and walk because my ankle was still healing. I felt trapped.

I had the best nurses a patient could hope for. They empathized with me and became frustrated with the doctors who had left me in such pain. One nurse offered to help, and she had the magic formula. She asked for a pain consultation for me, and an hour later a pain-management doctor came into my hospital room. He asked about my history and current pain status, and didn’t hesitate to prescribe an opioid for me. In all my life, this was the first time I had ever seen a pain-management doctor. After taking the opioid, I finally felt relief and was able to sleep. At last, when one of my doctors who knew me came to see me, she apologized, saying how those other doctors didn’t know me like she does.

The moral of the story: If something similar happens to you, be prepared and know you are not alone. Pain management is changing, and there is good reason for it. In 2017, according to the National Institute on Drug Abuse, 70,237 deaths occurred from overdoses compared to 16,849 in 1999. Opioids are highly addictive and are not likely to be a safe and effective long-term treatment option for chronic pain any longer.

The best advice I can give you is to talk to your doctors about pain management. If you are having surgery, find out what their protocols are. Ask if you will need a referral for pain management. And do not confuse emotional pain with physical pain. If you suspect that you are depressed, talk to your doctor. Start the conversation now so you will have a plan in place for when you most need it.

Lori Hartwell is the Founder & President of Renal Support Network (RSN) and the host of KidneyTalk™, a radio podcast show. Lori was diagnosed with kidney disease at the age of two. In 1993 she founded RSN to instill “health, happiness and hope” into the lives of those affected by chronic kidney disease. Lori is also the author of the inspirational book Chronically Happy: Joyful Living in Spite of Chronic Illness and is a four-time kidney transplant recipient.