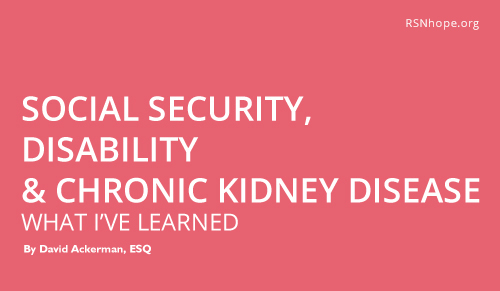 Being on dialysis and not feeling well while trying to remain gainfully employed can be challenging. As an attorney with civil litigation cases, I could have court hearings, trials, or other matters scheduled which would be extremely difficult to cover while spending three days a week on hemodialysis. When I went on dialysis, I researched my options as far as disability payments and tried to find what was best. Here’s what I’ve learned:

People who have Chronic Kidney Disease (CKD) may qualify for Social Security Disability (SSD). Those with CKD who are on dialysis (either hemodialysis or peritoneal dialysis) may automatically qualify.

SSD pays disability benefits to those who can’t work because they have a medical condition that’s expected to last at least one year or to result in death. To qualify, one must have worked long enough in jobs covered by Social Security, and have a medical condition that meets Social Security’s definition of disability. As for the first qualification, generally you need 40 credits, with 20 earned in the last 10 years. With a maximum of four credits being earned a year in a full time job, this means one must have worked for 20 years total, with 20 of the credits coming in the last 10 years. (Younger workers may qualify with fewer credits on a graduated scale, but a minimum of six credits in the preceding three years prior to disability are still needed.) As for the second qualification, the disability must be total (partial or short-term disabilities do not qualify), and must be expected to last at least one year or result in death.

Social Security has five questions to determine whether one is totally disabled. Answers to the first three often determine eligibility:

(1) Is the applicant working? If they are and their earnings average more than $1,130 per month, they will be determined not disabled.

(2) Is the condition severe? The condition must interfere with basic work-related activities.

(3) Is the condition found on the list of disability conditions which automatically qualify? Here is where CKD comes into play. While there are several different CKD conditions that may be separately addressed, being on hemo or peritoneal dialysis are qualifying conditions. However, it still must be shown that the dialysis is expected to last at least one year. Even those who have had a kidney transplant will be considered disabled for only one year from the date of transplant. After that, Social Security will evaluate any residual impairment(s) by considering post-transplant function, any rejection episodes, complications in other body systems, and any adverse effects related to ongoing treatment.

Generally, if all three of the above requirements are met, the applicant is considered qualified. If there is still a question, Social Security will go on to determine the following:

(4) Can the applicant do the work they previously did?

(5) Can the applicant do any other type of work?

Once the determination is made and the disability applicant is approved, the first benefit will not be paid until the sixth full month after the date of disability began, and it is paid the month following. As an example, if the date dialysis starts is June, the first month for benefits would be December, and those wouldn’t be paid until January.

Once approved, and after the first year of receiving benefits, Social Security will help and encourage beneficiaries to return to work. A “trial work period” allows one to “test their ability to work.” For no more than nine months within a 60-month period, one can receive full benefits and have unlimited earning, as long as they report their work and continue to have a disability. In 2016, a trial work month is any month in which the beneficiary’s earnings are over $810. If self-employed, it is $810 after expenses or more than 80 hours work in their business. After this trial work period, whether it lasts nine continuous months or sporadically nine months over the five-year period, one must either go off SSD or cut back on the outside earnings. One can still work and receive full benefits, but only for 36 months, and the monthly earnings must not be “substantial” for any month. This amount may change each year, but for 2016, any earnings over $1,130 in any month are considered substantial. Outside expenses necessary to do this work may be deducted. If benefits are terminated because of “substantial earnings”, there is a five-year period to request a restart of benefits if the applicant is again unable to work.

While SSD can help cover lost income due to CKD and being on dialysis, there are other options that may not be as stringent as Social Security’s determination of total disability. Each state probably has its own version of State Disability Insurance. In California, each employee including self-employed individuals, pay into SDI. While SDI payments are limited in how long they can be paid, these payments may be greater than what SSD would pay.

In my case, I applied for SSD but was rejected because I had an office which I really didn’t want to give up at that time. It was assumed by Social Security that if I had an office, I had to work to make rent payments, etc., and therefore my disability was not permanent. Although I didn’t agree with this assessment, it turned out well for me in that I did go back to work and actually earned much more than I would have on SSD. I also went on SDI when I had my transplant, received more than I would have on SSD, and went back to work about four months later.

The bottom line for anyone is before making any decision about continuing to work, or applying for benefits, make sure you know and consider all your options. Discuss these with your family and/or other advisers. 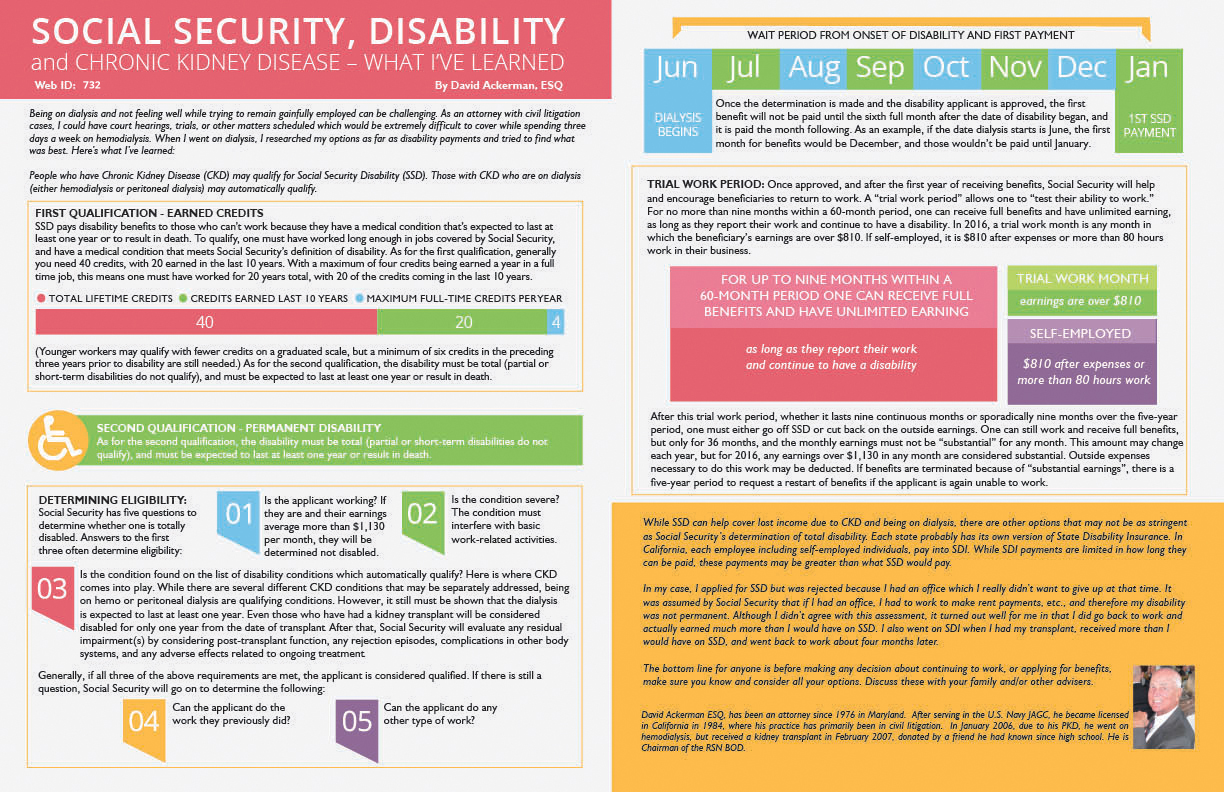 David Ackerman ESQ, has been an attorney since 1976 in Maryland.  After serving in the U.S. Navy JAGC, he became licensed in California in 1984, where his practice has primarily been in civil litigation.  In January 2006, due to his PKD, he went on hemodialysis, but received a kidney transplant in February 2007, donated by a friend he had known since high school. He is Chairman of the RSN BOD.