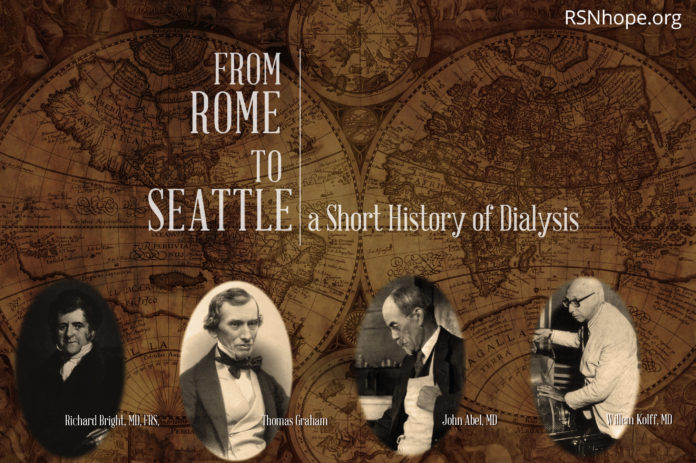 The basic foundation of nephrology and dialysis goes back many centuries. As early as 100 AD, the citizens of Rome used their steaming hot baths to “sweat out” the toxins when urea began building up in their bodies. The real research in removing extra fluid and toxins from the body, however, may have begun with Richard Bright, MD, FRS, who was known as the “Father of Nephrology,” and, later in life, was appointed Physician Extraordinary to Queen Victoria of England. Bright conducted early research on kidney disease during the first half of the 19th Century.

Taking up the research gavel was Thomas Graham, a Professor of Chemistry in Glasgow, Scotland, who first described the dialysis process and coined the word “dialysis” in 1861. His basic method of extracting urea from urine is still being practiced today.

John Abel, MD, developed the first artificial kidney for animals in Baltimore, MD, in 1913. He experimented with separating large molecules from similar compounds through a vegetable parchment coated with albumin.

The person recognized for being the “Father of Dialysis,” however, is Willem Kolff, MD, a physician in The Netherlands. When Germany attacked his country in 1940, he founded the first blood bank on the European continent. Unwilling to continue serving under Nazi rule, Kolff escaped to the small, inconspicuous town of Kamden. It was in that town’s municipal hospital that he developed the first successful artificial kidney and conducted the first dialysis treatment in 1945.

The First Chronic Dialysis Patient
It has been during the last half-century that dialysis has made its most extraordinary advancements. One of the most noted moments in the history of dialysis occurred on March 9, 1960. On that day, Belding Scribner, MD, Wayne Quinton, and David Dillard began treating the first chronic hemodialysis (HD) patient in Seattle, WA.

Scribner had recently been disturbed by the death of another chronic patient who was sent home to die. He awoke in the middle of the night with a new idea about how to develop shunting cannulas to perform dialysis. The shunts were made of a TeflonR tubing that had just become available and was thought to be non-reactive to tissues (only later were its non-stick properties realized). He and Quinton, the hospital biomedical engineer, devised the shunts with the tubing and off-the-shelf plumbing supplies for the connectors.

The device would be put to use for the first time that same year. Quinton bent the Teflon tubing at their first patient’s bedside, and Dillard, a pediatric cardiovascular surgeon, placed the shunt. The patient, a Boeing machinist named Clyde Shields, spent the next 11 years on HD. Two other dialysis patients followed within that same month, proving that repeated dialysis was possible.

The First Dialysis Centers
In the late 1940s, Nils Alwall began working on a project in Lund, Sweden, that would be replicated time and time again–the first out-of-hospital dialysis center. He had designed the first blood vessel cannula for HD in 1948 and in 1950, but chronic dialysis did not become a reality until the invention of the Scribner shunt made of Teflon. This material reduced clotting and allowed blood to flow freely through the tubing. This enabled the dialysis process to be repeatedly performed. It also led to the world’s first chronic dialysis center–the Seattle Artificial Kidney Center, later renamed the Northwest Kidney Centers (NKC)–to open in January 1962 in Seattle.

Seattle soon became enshrined in the kidney treatment story. In the early 1960s, Scribner began working on opening the NKC. This pioneering nephrologist approached James Haviland, MD, President of the King County Medical Society, and the Seattle Area Hospital Council for support, and they obliged. He was also able to obtain funding from the John A. Hartford Foundation and the U.S. Public Health Service. Scribner’s vision became a reality. The kidney center used space in the basement of the nurses’ residence at Seattle’s Swedish Hospital.

From Humble Beginnings to Glowing Prototypes
The center had humble beginnings. There were only three beds, three patients, two nurses, one technician, and a Medical Director. The center also allowed nurses to provide dialysis treatments for the first time. Patients dialyzed 12-16 hours twice weekly with Skeggs-Leonards dialyzers using Sweden Freezer batch tanks for the dialysate.

There have been significant advancements in dialysis since the early days, but the first chronic centers in Sweden and Seattle will long be remembered as prototypes for the thousands of centers existing today.

Who Shall Live?
In the early 1960s, funding for dialysis patients was limited. Patients had to pay for treatments out of their own pockets or organize fundraising campaigns. In addition, there was limited access to dialysis machines.

The dilemma of deciding who should receive treatment brought to the fore the problem of “choosing” patients. An anonymous lay committee, or “life-and-death committee,” was established to decide which patients were worthy of treatment. Patient candidates were judged on their moral value, their position in the community, and their likelihood of continuing existence. Unfortunately, there were more renal patients than could be cared for.

In 1964, Scribnerand his colleagues lobbied Washington state’s senators to obtain funding for dialysis patients. At the same time, the National Kidney Foundation, nephrologist George Schreiner, MD, and other physicians were also lobbying Congress. These efforts led to the passage of House Resolution 1 in November 1972 and the eventual demise of the “infamous” life-and-death committee.

The Medicare ESRD Program
In 1973, another landmark was realized. The bill that Congress passed establishing the Medicare End-Stage Renal Disease (ESRD) Program provided access to treatment for nearly all patients in the U.S. (as long as they or a family member had paid into the Medicare system).

Today, there are approximately 400,000 thousand patients on dialysis in this country. With in-center dialysis offered throughout the U.S. and other patients dialyzing themselves at home as well as the great success of kidney transplantation, virtually everyone who needs treatments for ESRD receives it, regardless of age, nationality, or health circumstances.

While both short daily and slow nighttime dialysis have been used on a select group of patients for decades, the National Institutes of Health is currently conducting clinical trials to determine the efficacy and safety of these treatments. Meanwhile, until even more effective treatments can be found for kidney failure, it is as important as ever that such diseases as diabetes and hypertension, the two leading causes of renal disease, be detected early and treated vigorously.

About the Author
Lori Hartwell realized one of her most ambitious dreams to date when, in 1993, she founded the Renal Support Network (RSN) to instill “health, happiness, and hope” into the lives of those affected by chronic kidney disease. The influence of this patient-run organization–which started out as a Southern California grassroots effort–now extends across America. In addition, she is the author of Chronically Happy – Joyful Living in Spite of Chronic Illness, which chronicles her approach of taking simple, logical steps in order to realize one’s dreams. More information about Lori and the RSN can be found by logging onto www.RSNhope.org.