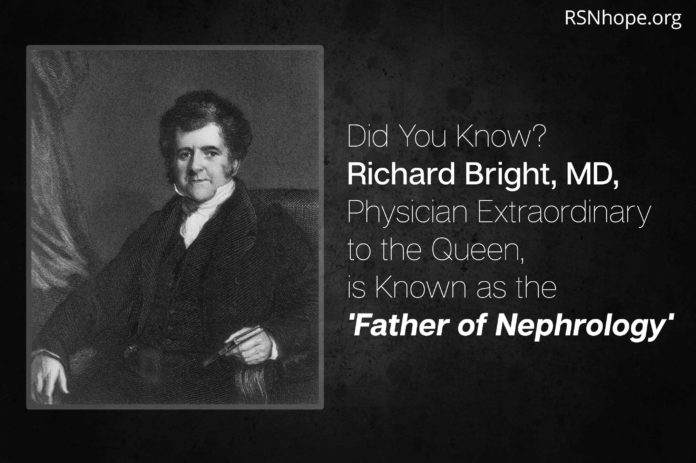 Introduction
Known as the “Father of Nephrology,” Richard Bright, MD, FRS, was appointed Physician Extraordinary to Queen Victoria. His important early research on diseases of the kidney was performed during the first half of the 19th Century.

Bright was born on September 28, 1789, in Bristol, England. Richard, Sr., was acutely interested in science and encouraged the interest of his son in science and medicine. In the summer of 1810, following medical studies at the University of Edinburgh, Bright was part of a scientific expedition to Iceland, where he collected botanical and geological specimens. During the fall of that same year, he began his lifeline association with the prestigious Guy’s Hospital in London.

Physician Extraordinary
In December 1816, Bright obtained the title Licentiate of the Royal College of Physicians. He became an Assistant Physician at London Fever Hospital. While there, he developed a severe fever of his own and nearly died. In 1818, he made a second trip to Europe and visited clinics in France, Germany, Italy, and Switzerland.

In 1820, Bright began his own practice at 14 Bloomsbury Square. Later that year, he was elected to the Royal Society. Soon, he became a leading consultant in London and, in recognition of his many contributions to medicine, obtained the title of Physician Extraordinary to Queen Victoria.

Kidney Work
Early in his medical career, Bright began studying organic changes in the kidney’s structure. During 1825-1827, he studied 23 patients with albumin in the urine. More than half of these patients died, and all had kidney disease. These findings, among others, were published in 1827, and this work dubbed afflictions of the kidneys “Bright’s Disease.”

In 1842, Guy’s Hospital cordoned off two wards of 21 beds each for Bright to carry on his study of kidney disease. Included were a small clinical laboratory, a consulting room, and office. It was the first clinical experimental unit in England.

Bright also had an interest in researching diseases relating to the heart, liver, pancreas, duodenum, pulmonary, fevers, and abdominal tumors.

Conclusion
During the latter part of his life, Bright knew he was suffering from valvular disease of the heart. On December 11, 1858, he suddenly became deathly ill. Five days later, he died at the age of 69.

At St. James’ Church in Piccadilly, a memorial was erected to Bright with the following sentiment:

“He contributed to medical science many discoveries and works of great value,
And died while in the full practice of his profession,
After a life of warm affection, unsullied purity, and great usefulness.”