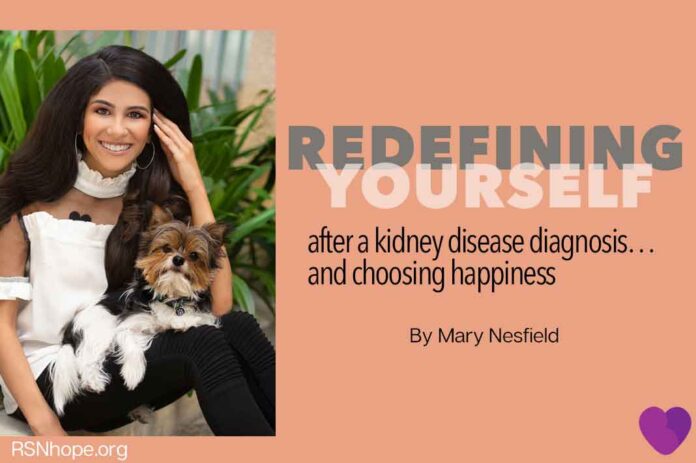 Gemma Lafontant was approaching her 13th birthday when she first heard her kidney disease diagnosis. “Can we have pizza tonight?”

The phrase “low sodium diet” didn’t exactly fit the bill, so her mom, Charlene, stepped up by preparing low-salt recipes. The entire family rose to the occasion by jumping onto the low-sodium bandwagon. “Even dad,” Gemma boasts.

Gemma’s other relatives wanted to help too, and the testing process for a donor soon began, with friends and family from across the country volunteering.

Before her diagnosis, there was concern when she wasn’t keeping pace with the growth spurts other girls her age experienced. She was referred to an endocrinologist. “I had to take growth hormone shots,” she says. She endured 365 shots in one year and her parents promised a family pet as a reward for being so brave.

“Even though the growth hormone barely added two inches to my height,” she stated, “I met my furry soulmate, and it was worth every single needle.” Her new best friend was a one-pound puppy named Skippy, who became Gemma’s protector, often warning others to keep their distance from Gemma with a tiny but mighty little growl with no malicious intent.

One day, at a regular check-up, Gemma’s blood pressure was extremely high for her slight 63-pound frame and this is when doctors discovered her need for a new kidney. To avoid eventual dialysis, Gemma’s doctors and her family were striving for a preemptive kidney transplant.

Her mom could not be a donor; she had only one kidney after one had been removed previously. Gemma’s dad was not a match either, but Gemma’s cousin Claire was! In fact, Charlene recounts, according to the team at Children’s Hospital Los Angeles, it was the best match they had seen in years. It was all set, that is until just a few days before surgery when Claire developed kidney stones. Having to cancel the procedure was disappointing. 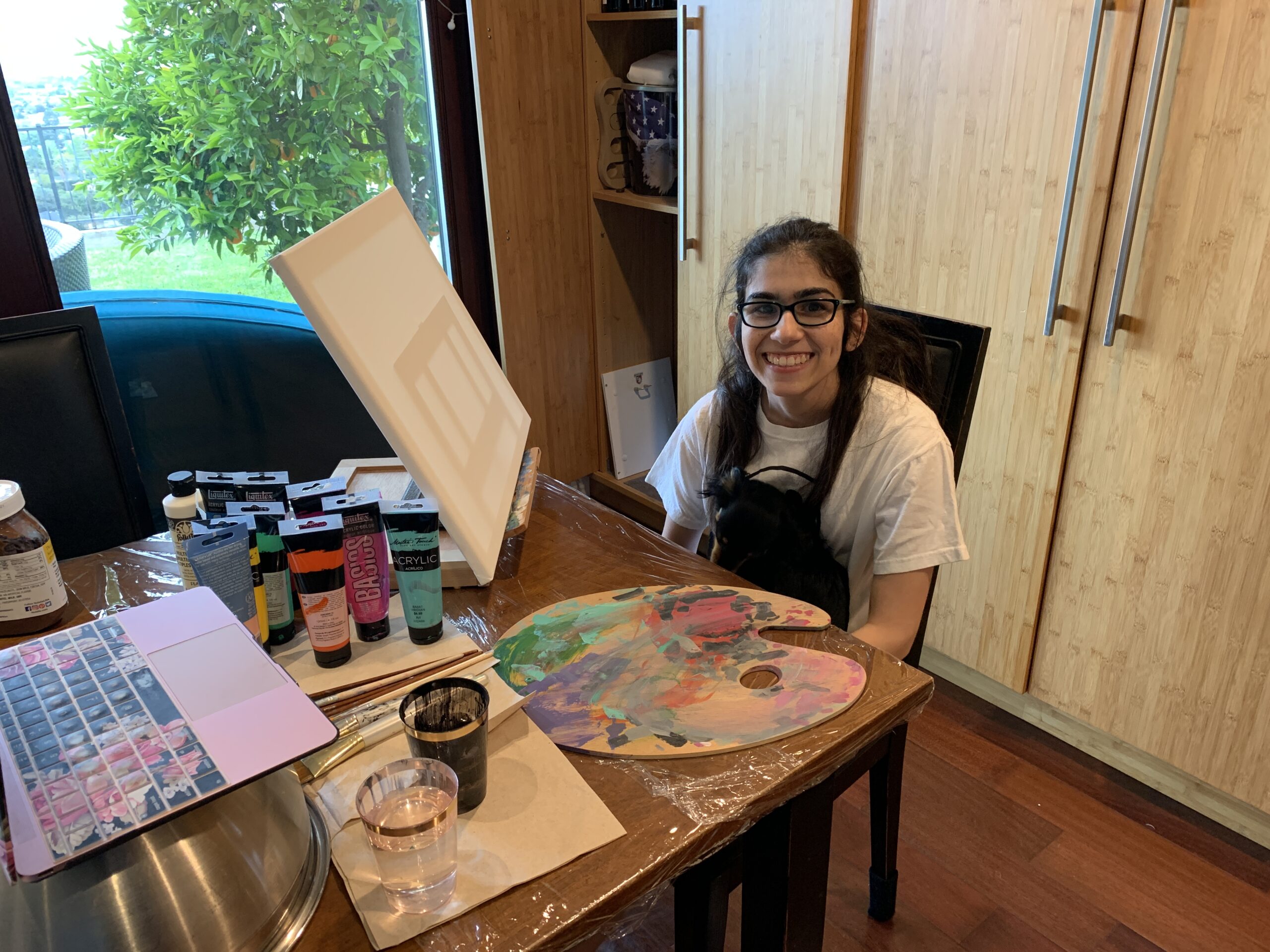 Then an angel named Floris, the wife of another cousin, tested and was also a match. The 26-year-old was in graduate school in Minnesota at the time, and she flew to California to become Gemma’s hero. The surgery took place in February 2017, and it was a success! Gemma was glad she could avoid dialysis! While recovering in the hospital, she took to drawing Disney characters, giving one to each member of her medical team. 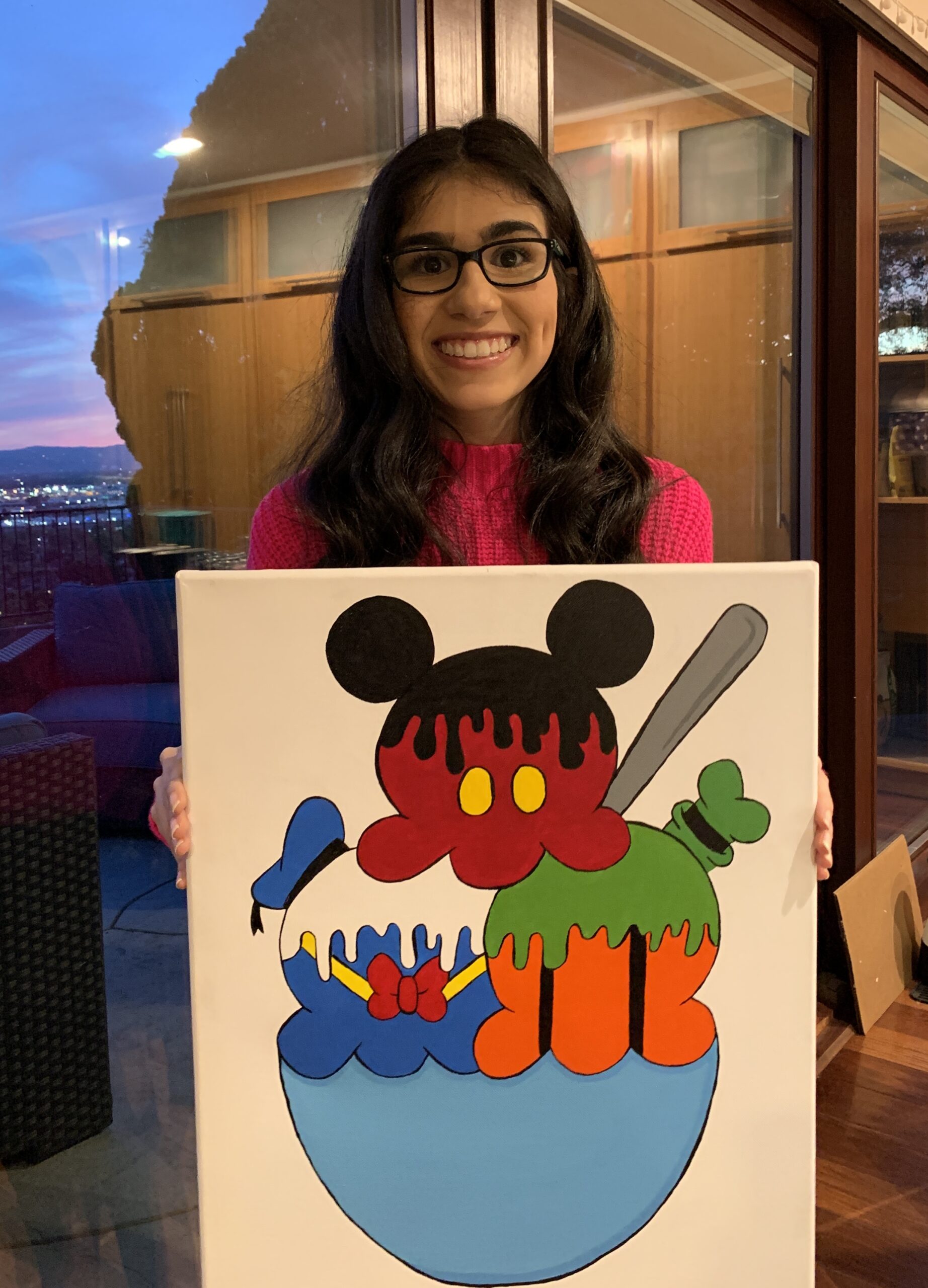 Something Gemma found difficult during her recovery was swallowing pills. Initially, she needed to take about 20 pills each morning and 20 more each night! Fortunately, her caregivers taught her to swallow them with Jell-O.

An active crafter, seamstress, and artist, Gemma enjoyed virtual painting classes during the Covid-19 pandemic and has kept busy with online school and other creative projects. She draws inspiration from Pinterest and YouTube videos. She’s even led her own painting class at Renal Support Network’s (RSN’s) Studio Hope.

Before her surgery, Gemma found something interesting on TV. It was a beauty pageant. After much preparation and practice, she entered her first pageant just days before her transplant.

To satisfy her need to compete, Gemma continued along the pageant route. Her coach helps her develop stage presence and public speaking skills. Gemma sees it this way, “If it weren’t for pageants, I would still have severe stage fright, I would not know how to deal with defeat, and I would not have met the people who have helped to shape me into the person I am today.” 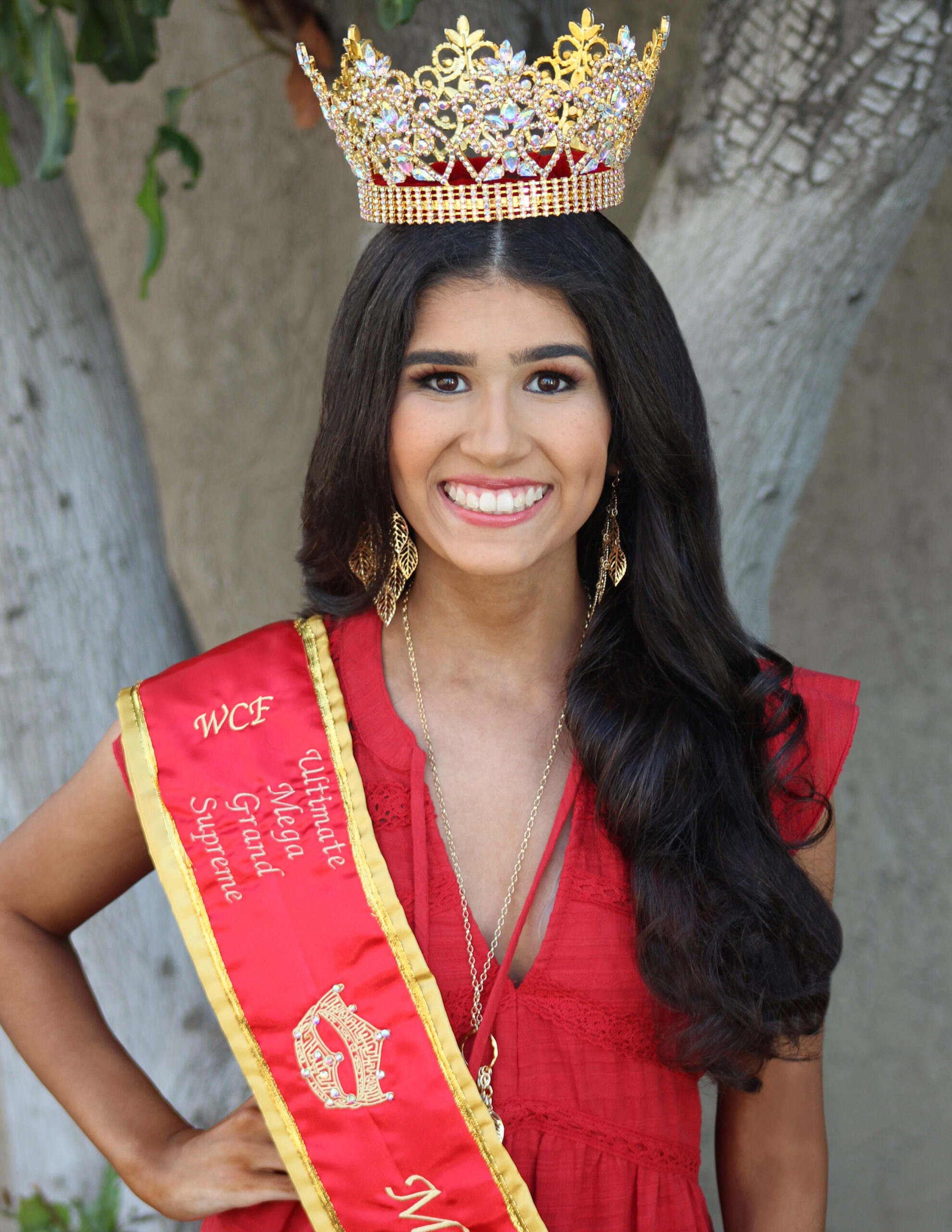 Gemma finds it fun to travel for competitions. She looks forward to reuniting with people of all ages, but forming relationships with younger competitors is what she enjoys most. One child Gemma looks forward to seeing is Julianna; she is inspired by Gemma, and the two have become friends.

“Gemma is modest about being a role model, but there are several younger girls on her pageant team who connect with and look up to her,” her mom says. “It makes my heart happy to see who she has become in spite of her health challenges.”

And although Gemma still feels nervous participating in judged interviews at pageants, it’s what inspires her to tell her story. “I bring awareness about kidney disease and transplantation,” she says.

Once she takes the stage, Gemma confidently wows everyone with her magic routine, the one she developed by carefully observing other magicians. She has garnered myriad awards, and recently won the coveted top title, “Mega Ultimate Grand Supreme,” at a West Coast pageant!

Gemma will graduate high school in June of 2021. She plans to continue on to college and study early childhood development to live her dream of becoming an elementary school teacher.

“Gemma loves working with children,” says Charlene. “She has a calming way about her.” There is no doubt the kids will love her—and that will bring Gemma joy throughout her life. Oh yes, and she’s also very happy now that she’s down to swallowing only 10 pills a day!