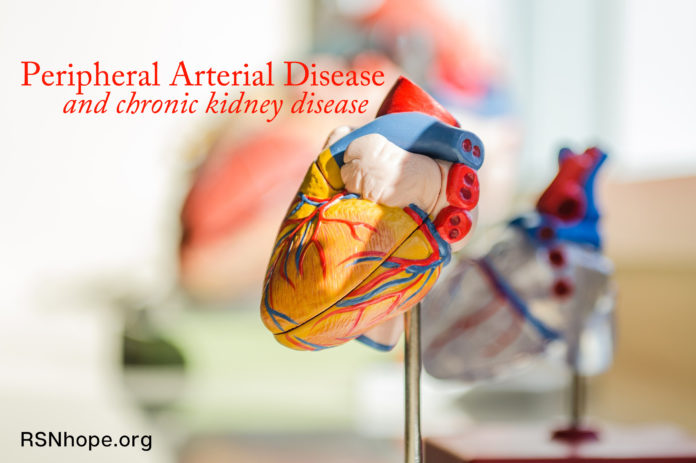 Renovascular disease is progressive. The severity of disease worsens over time. In fact, obstructive disease can progress in the same or both kidneys or can lead to complete interruption of the blood supply to a kidney within 3 years of follow up. Also, there is an association between worsening renovascular disease and declining renal function (chronic kidney disease or CKD). It is estimated that 25% of patients over the age of 60 years that enter dialysis have severe renovascular disease. It is known that CKD is a strong predictor of mortality. Also, PAD is a strong independent predictor of death. When a patient has both CKD and PAD the risk of dying is higher than having just one or the other. In a recent study, the 6-year mortality with CKD alone was 28%, PAD alone 26% and CKD and PAD together is 45%.

Renovascular disease is quite often neglected. A random screening for renovascular disease in the general population is however, not recommended. Screening is typically done on patients with resistant hypertension to 2 antihypertensive drugs and/or with worsening renal function. A sudden rise of blood pressure in patients less than 30 years of age or severe high blood pressure in patients over the age of 55 should raise suspicion for renovascular disease. Patients less than 30 years of age and who develop sudden high blood pressure are likely to have non atherosclerotic obstructive disease to the blood vessels of their kidneys. In fact, impairment of blood flow to the kidney in this age category is likely due to a condition called fibromuscular dysplasia (FMD), caused by excessive growth of cells in the blood vessels of the kidneys and is more common in females than males. A common class of drugs used in treating high blood pressure is the angiotensin converting inhibitors (ACEI). Patients with severe renovascular disease particularly involving both kidneys can have a sudden worsening of their kidney function with these drugs. This typically hints to the presence of severe obstructive renovascular disease.

Preventative treatment is recommended by the National Kidney Foundation (NKF) to reduce mortality from PAD in patients with CKD including patients with renovascular disease. Data on the management of PAD in the CKD and dialysis patients is, however, lacking. Therefore most guidelines have been extrapolated from the general population. Patients with PAD already are at very high risk of cardiovascular death. In fact, the majority of these patients die of heart attacks or strokes. Risk factors modifications to reduce cardiovascular events are strongly advised when a patient is diagnosed with PAD. An aggressive treatment of fats in the blood (cholesterol and triglycerides) is particularly important. The current national target for the bad cholesterol (low density lipoprotein or LDL) is less than 100 mg/dl and preferably close to 70 mg/dl. This can be achieved with dietary interventions and several drugs that are available including statins, niacin and cholesterol binders. High density lipoprotein (HDL) or the good cholesterol is responsible for reducing atherosclerotic plaque burden from the blood vessels and it should be targeted to more than 40 mg/dl for males and more than 50 mg/dl for females. Eating a diet with higher unsaturated fat, exercising, reducing weight and quitting smoking can be helpful in raising HDL. Drugs such as niacin and certain statins (rosuvastatin) can help raise HDL. Triglycerides should be targeted to less than 150 mg/dl and this can be accomplished by reducing carbohydrate intake, exercise, weight loss and certain drugs such as fenofibrates. Also, quitting smoking is critical in patients with PAD. Smoking is one of the highest risk factor for PAD. In addition, control of blood pressure to less than 135/85 mmHg in non diabetic and less than 125/80 mmHg in diabetic is strongly recommended to prevent end organ damage such as the kidney, brain and heart from excessive high pressure. Furthermore, managing diabetes with diet, exercise, weight loss and one or combination drugs is essential. It is currently recommended that the target for HbA1c is less than 7. Finally establishing a routine exercise and keeping ideal body mass index are strongly recommended in the PAD patients.

In patients with renovascular disease, kidney function and size needs to be followed closely. Patient’s kidney function needs to be measured frequently by a blood test called glomerular filtration rate (GFR) derived from the creatinine blood level. Kidney size is also an important measure as a shrinking kidney size compared to the contralateral one may indicate progression of severe renovascular disease.  In patients with established renovascular disease or following stenting of the renal arteries, progression of the severity of the obstruction can be followed by a specialized ultrasound measurement called duplex ultrasound. Other modalities can be used as well such as the magnetic resonance angiography (MRA) and the computed tomography angiogram (CTA). CTA however, involves the use of iodine based contrast and in patients with CKD this carries the risk of worsening kidney function.

In summary, CKD and PAD can coexist in the same patient and they carry a high rate of adverse outcomes to patients. Physicians need to be diligent in identifying and treating these conditions as appropriate. Adhering to preventative treatment is of paramount importance in reducing cardiovascular death in these patients. In addition, aggressive interventional treatment is appropriate in a select group of patients with severe renovascular disease and with uncontrollable blood pressure, progressive renal dysfunction, angina or heart failure despite optimal medical treatment.

About the Author
Dr Nicolas Shammas received his combined MD-Master of Science in Cardiac Physiology at the American University of Beirut in 1987.  Following a year of cardiac interventional fellowship at the University of Iowa he moved to the Quad-Cities in 1995 and  since then has been practicing cardiology in Iowa. He also founded the Midwest Cardiovascular Research Foundation in collaboration with several hospitals including the Genesis Heart Institute in August of 2002 to accelerate independent cardiac research and promote wellness to the community thru education and state of the art technology.  He is currently enrolled in legal studies finishing his Executive Juris Doctor Degree in Health Law at Concord Law University and expecting to graduate December of 2011.