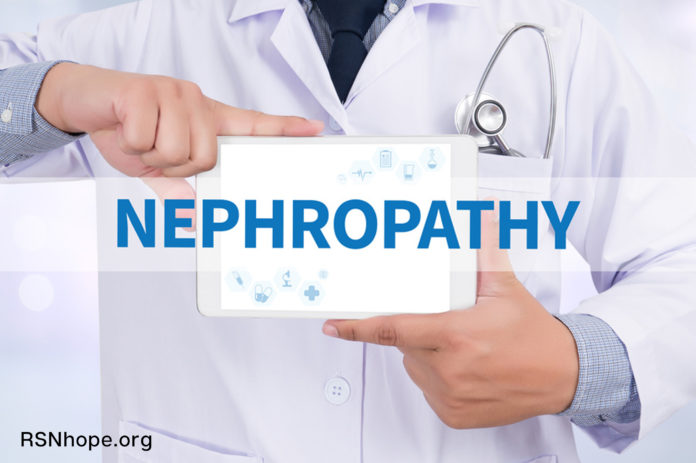 Diabetic nephropathy appears to begin with changes in the glomeruli of the kidneys. Each kidney contains anywhere from 400,000 to 1 million glomeruli, which are tufts of tiny blood vessels called capillaries that filter waste products, chemicals, and water from the blood to produce urine. An increase in the width of the glomerular basement membrane, the surface across which filtration occurs, can be expected within the first two years of developing diabetes.

Virtually all people with Type 1 diabetes develop some changes in the glomerular basement membrane, but not all go on to develop serious kidney disease. In individuals who develop advanced nephropathy, other important changes take place in the kidneys. The core tissue between the capillaries of the glomeruli, called the mesangium, expands, compressing the capillaries. This compression decreases the surface area available for filtration, so the kidneys become less efficient at filtering waste products from the blood. As this process continues, eventually the mesangium and capillaries become a mass of scar tissue.

Unlike many other kidney diseases, diabetic nephropathy is silent in its early stages, producing no signs or symptoms. However, one indicator that often appears before the kidneys become impaired is the presence of protein in the urine (a condition called microalbuminuria). Trace amounts of the protein albumin can be detected by certain very sensitive urine tests. Hypertension is also a red flag that diabetic nephropathy may be present.

Unfortunately, by the time detectable amounts of albumin are present in the urine or hypertension appears, much of the damage is already done. The person will eventually develop end-stage renal disease, requiring dialysis or transplantation. At this point, certain measures can be taken to slow—but not stop—the disease process. Tight control of blood glucose levels, control of high blood pressure, and a dietitian-prescribed diet low in protein may all slow or delay the progression of diabetic nephropathy. Drugs that lower blood pressure, including ACE inhibitors and angiotensin-II receptor blockers (ARBs), can also help. ACE inhibitors include ramipril (brand name Altace), captopril (Capoten), and enalapril (Vasotec). ARBs include irbesartan (Avapro), losartan (Cozaar), and telmisartan (Micardis).