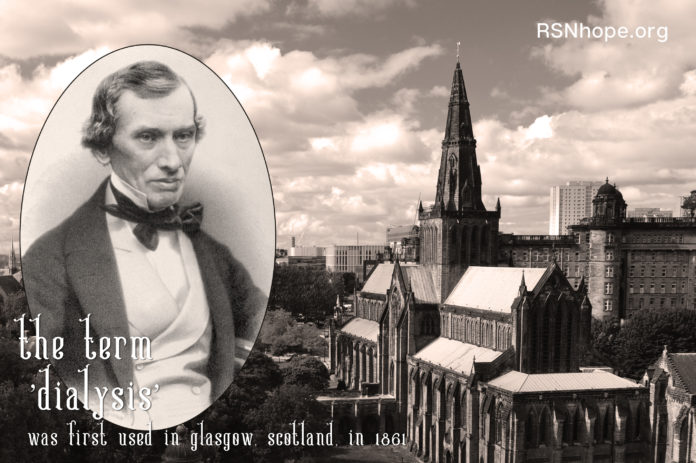 Introduction
Thomas Graham, a Professor of Chemistry in Glasgow, Scotland, first coined the term “dialysis” in 1861. His research on crystallized compounds diffusing through a vegetable parchment coated with albumin, which served as a semi-permeable membrane, was a means of separating large molecules from similar compounds.

Graham extracted urea from urine and termed his method “dialysis.” His basic method is still being used in dialysis centers and hospitals today. Graham is perhaps best known for “Graham’s Law” relating to the diffusion of gases, but he is also regarded as the father of colloid chemistry.

The Early Years
Graham was born in 1805 and died in 1869. His father was a textile manufacturer who believed his son should enter the church. Graham resisted his father’s entreaties to live the secular life, however. In 1826, he graduated from Glasgow University. He did his graduate work in Edinburgh, where he gave his first chemistry lectures.

Returning to Glasgow in 1828, Graham found work as an industrial consultant. Then he was elected to lecture in chemistry and mechanics at the Glasgow Mechanics Institution. In 1830, he became one of the first Professors (he was named a Chair of Chemistry) of the Andersonian University.

“A Brilliant Experimentalist”
Unfortunately, despite his recognition as “a brilliant experimentalist who had the ability to insure his students to do excellent research,” Graham was reported to have been very bad at teaching elementary classes. He was not a good disciplinarian and “was hopeless at explaining his subject to an audience.” He did excel, however, in laboratory work.

In 1837, Graham took up a Chair at the University of London. He became deeply involved in the motion of atoms in liquids and gases and spent the majority of his time studying the diffusion of gases. He also did a study on the nature of phosphates. For this work, he became the recipient of the Keith medal from the Royal Society of Edinburgh in 1833 and the medal of the Royal Society five years later. Later, he was elected for Fellowship.

Conclusion
In 1868, the year before his death, the chemistry professor’s work on the diffusion of gases was used in discovering the chemical formula for ozone 03.

Highly regarded by the people of Glasgow, Graham is commemorated by a statue in George Square in that city. 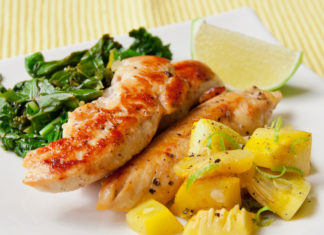 March is Kidney Month: If you eat a lot of unhealthy, junk and fast food, then your organs have to face the consequences, including...

Anemia and CKD: What Every Patient Should Know 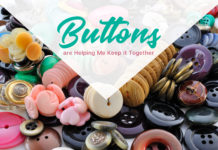 Buttons are Helping Me Keep it Together 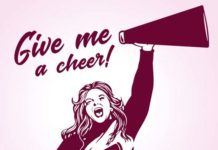 Give Me a Cheer! – Honorable Mention Winner, 13th Annual Essay... 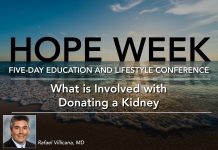 What is Involved with Donating a Kidney 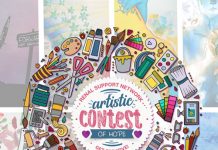