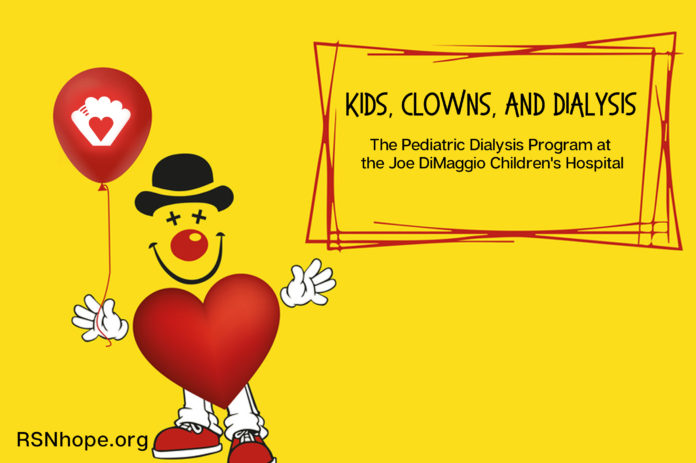 Among the general population, a little more than 30 out of every 100,000 people develop kidney failure annually. In the pediatric population (age 19 and under), the annual rate is 1-2 new cases in every 100,000. This means that adults are around 20 times more likely to develop kidney failure than children, but the risk increases steadily with age.

Around 50% of kidneys that are transplanted into children are donated by family members or a family friend. A living donation from a parent, especially, usually guarantees a better match.

What About Compliance?
There is also the question of “compliance” or “adherence” among teens to prescribed medications or in following a doctor’s orders. Teenagers with transplanted kidneys are often noncompliant because the anti-rejection (immunosuppressive) drugs they must take every day often change their appearance in ways that can be unflattering. A child psychologist may be needed for tips to reinforce the desired behaviors.

Clearly communicating about the reasons for treatment and the importance of following the medication and treatment regimens are very important for children and adults alike. Children who clearly understand how the decisions they and their parents make can affect their healthcare are more likely to take the responsibility for their actions.

Additional Problems Children Face
Besides the compliance and other problem issues faced by everyone who has renal failure, additional problems for children can include effects on their growth and development. The isolation children and adolescents feel can be a special problem because of the importance of making friends and “fitting in.”

Finding the best treatment for a child with kidney failure is especially important so the child can look ahead and feel more comfortable with becoming an active, well-adjusted, and productive adult. 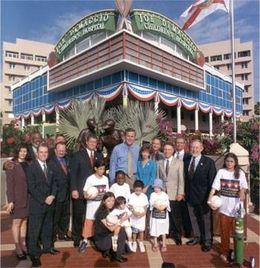 “A Wonderful Place”
There is a wonderful place I recently visited whose dedicated professional medical staff does its best to provide the very best treatment it can to a child or adolescent with kidney disease and renal failure. It is the Comprehensive Pediatric Dialysis Program at the Joe DiMaggio Children’s Hospital at Memorial in Hollywood, FL. Now, you wouldn’t think a hospital would really be a great place, particularly for kids, but this place is one of a kind.

Two other kidney patients, a caregiver, and I were given an extensive tour of the hospital by the pediatric nephrology social worker, Roxanne Duncombe, MSW. We started in the dialysis unit. I have only been in one other pediatric unit in my life. This hospital’s program was started in 2004 with two hemodialysis patients and is the only comprehensive pediatric dialysis program of its kind in both Broward (Fort Lauderdale area) and Palm Beach counties. While, on first thought, this may not seem to be the place for a child, the staff could not be more caring and positive. 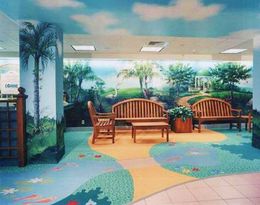 Color Themes and a Teacher
Next on the tour agenda were the examination rooms surrounding the dialysis unit. Each room had a theme. We were told that local artists had donated their time painting the rooms and hallways in bright, striking colors. Each room is themed–from surf-boards and beach scenes to balloons and aquariums. It made the area so cheerful and pretty.

Lengthy dialysis treatments are not much fun, especially for a child. A dialysis center becomes your second home. So many hours spent away from home and school can be challenging, though, fortunately, the Joe DiMaggio Children’s Hospital makes a teacher available. This teacher is from the Broward County Schools–the county where the hospital resides. This is so terrific as children on dialysis most likely miss many hours of school due to absences and/or not feeling well.

A Special “Lotsy Dotsy” Clown
After we walked through the dialysis unit and were about to exit, a real-life clown entered. Her name is Linda Herbert (a.k.a. Lotsy Dotsy). She said she had been working in the hospital for 10 years as a respiratory therapist, and, one day, decided to take a clown class at the local community college.

“I walked into the hospital one day [dressed as a volunteer clown], and, after being able to make people smile and take them away from their problems for awhile, I was hooked,” Lotsy Dotsy declared.

Linda wrote up a job description and was hired as a clown for the kidney kids. She spoke with us for a bit and told us that she also is a motivational speaker. This includes bringing a pediatric kidney patient along with her to schools to show kids they need never give up and not realize their dreams. Linda explained how children are able to open up to her about things on their minds, sometimes even death. Children have told her that, if they ask their parents if they are going to die, the parents tend to cry, so the children feel more comfortable asking the clown. She explained that she tells them we are all going to have to face that ultimate journey, but that there are too many things to do right now like playing and blowing bubbles… What a special person! 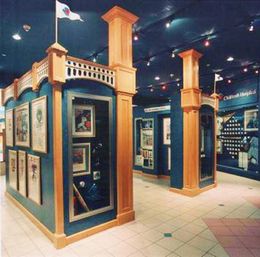 Batter Up
As we continued on our tour of the hospital we walked through the main lobby, which is a showcase to Joe Di Maggio.The hospital walls have glass cases with many baseballs and a bat. A beautiful painting of Joe adorns another area of the wall. As you walk down the hall, you see baseballs everywhere. Many are part of the tile on the floor. Some are on the doors, and others are even used as a center decoration on the check-in/information desk.

Both the name of the hospital and its interior design conjure up memories of one of the greatest sports figures in American history. Affectionately known as “the Yankee Clipper,” Joe DiMaggio was the only athlete in American history to be on four world championship teams in his first four seasons of play. He led his team, the New York Yankees, to nine titles in 13 years. In 1993, he broke the ground for the hospital named in his honor and died in Hollywood, FL, in 1999. DiMaggio was particularly proud of the hospital and the work it was doing for kids. He made frequent visits there, bringing wide smiles to the kids’ faces as he bolted into a pediatric ward with a welcoming, warm, outstretched hand.

The Family Room
As we continued upstairs, we entered the family room, which had a shower area and laundry machines. What a great idea for children that are staying for some time! The main area has a couple of couches, a big screen TV, and purple carpeting. One side of the room has a glassed-in “safe” play room for the children as well as some vending machines and carts filled with books.

On the opposite side of the glass room is a kitchen area. Parents are fed three times a day, for free. What a wonderful touch and a money saving gift for the parents…

Pet-A-Pet
A very special activity at the hospital is its Pet-A-Pet Program. Four-legged canine volunteers bring smiles of joy and laughter to the faces of the children. All the dog volunteers and their owners must complete screening and orientation classes before they can participate in the program.

These special, cuddly canines are a special asset for the kids, many of whom are frightened. It gives them an opportunity to laugh, hug, receive wet sloppy kisses, and play. It’s a great way to unwind and forget your troubles, at least for a short time.

Among the special furry little friends were Play Dough, a loving and intelligent greyhound with tons of energy, and Auggie, a dachshund-terrier mix who loved spending time with the kids.

Going Back in Time
Continuing on our tour, we came upon the wall of history. Edifying the walls are real photos going back in time.

There are several pictures of the hospital with captures going through the years… the 1970s, 1980s, 1990s, up until the present. The free-standing Joe DiMaggio hospital was completed in 2010. Currently, they “borrow” a section of Memorial Hospital.

The Good Doctor
Alexandru Constantinescu, MD (affectionately known as “Dr. Alex”), is the Medical Director of the pediatric dialysis unit. He is a kind and compassionate doctor. So nice that he invited us to a lunch he was having for his staff.

I have had my share of doctors, being a kidney/lupus patient for the last 19 years, and I can tell you that Dr. Alex cares about his patients and his staff. The hospital is lucky to have his expertise and compassion.

No Ordinary Hospital
The four of us on the tour later discussed the “vibe” at the hospital. We all agreed that everyone is so kind and friendly. The hospital has a warm atmosphere, which is quite rare.

We agreed that our tour guide, Roxanne, is a kind-hearted person. When we were waiting for our car, I recognized this young boy who was on dialysis walk up to Roxanne. He approached her with open arms and gave her a big hug.

Kidney Kid Anecdotes
Roxanne also has other special memories of the kidney kids at the hospital. One 12-year old girl was asked about her request from the Make A Wish foundation. She said she wanted to be taller. Like many pediatric end-stage renal disease patients, she was short in stature. Giving it some thought, Roxanne suggested that, maybe, she could request a Fashion Day in which a famous model or designer could show the little girl what she could wear to give the impression she was taller.

A 10-year-old girl was asked to give her thoughts on how her life might change following a kidney transplant. She simply said it would give her the opportunity to attend school every day… just like the other children.

One 17-year-old boy told Roxanne she had “really worked a miracle” by being able to get the support of a community agency to help pay the balance of his school tuition. This made it possible for him to graduate in June 2006 with the rest of his class.

Conclusion
It takes a special kind of person to work with sick children. The nurses, doctors, dialysis technicians, social workers, and one special clown come together in a place called Joe DiMaggio Children’s Hospital.

The long journey of kidney failure is not an easy one for an adult, but, for children and their parents, I can’t quite imagine how difficult it must be at times. Luckily for the children of south Florida, there is a special place that will keep your spirits uplifted, care for you physically, and treat you like family.

Check out the latest news and photos on Joe DiMaggio Children’s Hospital on Facebook.

About the Author
Julie Glennon was diagnosed with lupus and chronic kidney disease in 1988. After a year of hemodialysis, she received a successful kidney transplant in 1999. She keeps active volunteering with her local Palm Beach chapter of the American Association of Kidney Patients. She is also a member of the Renal Support Network (RSN) and volunteers as a patient activist and is an operator on RSN’s new HOPELine, a nationwide empowerment line for patients. Julie is currently renovating a 1920s historic house in Florida with her architect husband. The photos in this article were provided courtesy of the Joe DiMaggio Children’s Hospital at Memorial in Hollywood, FL. 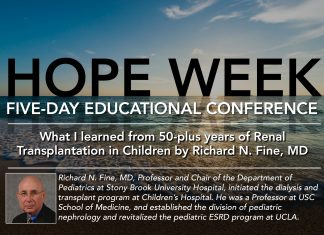 What I learned from 50 plus years of renal transplantation in...

What I learned from 50 plus years of renal transplantation in Children by Richard N. Fine, MD is a Renal Support Network Hope Week... 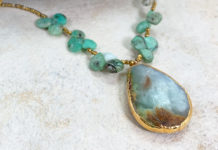 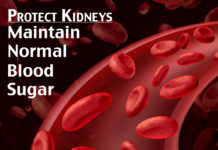