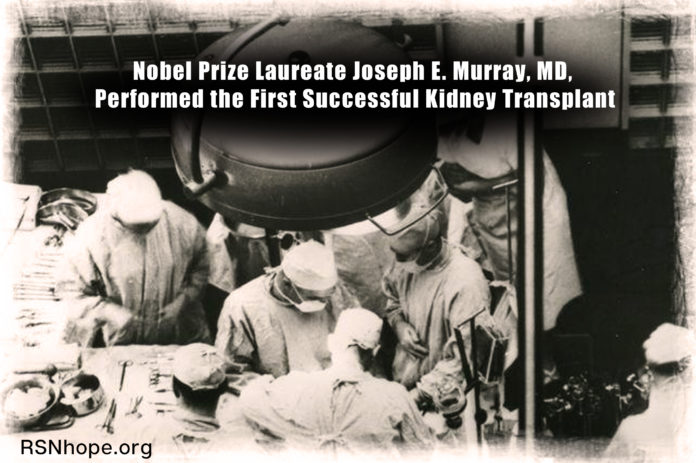 Introduction
It was two days before Christmas in 1954. The setting was the Peter Bent Brigham Hospital (later renamed Brigham and Women’s Hospital), Boston, MA. The achievement was the world’s first successful organ transplant: a kidney. The transplant surgeon was Joseph E. Murray, MD.

The kidneys of Richard Herrick, a patient of Murray’s, were failing, and he had to have a transplant or he would die. Fortunately, his life was saved when his twin brother, Ronald, agreed to donate one of his kidneys. The stage was set for the first successful organ transplant. The use of an identical twin in the transplant made such a procedure not only possible but successful since it, in effect, solved the rejection problem. Some time after the transplant, radiation was used to prevent rejection. In the early 1980s, that problem was solved by the introduction of cyclosporine, the first successful anti-rejection drug.

From Birth to World War II
Murray was born in Milford, MA, on April 1, 1919, only a few months following the end of World War I. His mother was a school teacher and his father a lawyer. Following high school, Murray studied Latin, Greek, English, philosophy, chemistry, physics, and biology at the College of the Holy Cross in Worcester, MA. In the midst of World War II (1943), he received his MD degree from Harvard Medical School.

A year later, Murray began his training as a doctor at Peter Bent Brigham Hospital. He was a surgeon at the US Army’s Valley Forge General Hospital, near Philadelphia, PA, from 1944 to 1947. Since the hospital was one of the top plastic surgical centers that had treated battle casualties, Murray became intensely interested in the biology of organ and tissue transplantation, and he became an expert in reconstructive and plastic surgery.

From Training to Chief Plastic Surgeon
Following his discharge from the Army, Murray had additional training at the Brigham. He was Chief Plastic Surgeon there for 35 years—from 1951 to 1986. From 1972 to 1985, he held the same title at Children’s Hospital Medical Center, Boston.

Murray holds the position of Fellow of the American College of Surgeons and is an Honorary Fellow of the Royal Colleges of Surgery of Australia, Belgium, Canada, Edinburgh, England, Ireland, and Singapore. During its 350th anniversary, the City of Boston honored Murray as one of its 350 most outstanding citizens in the medical profession.

The Nobel Prize
In 1990, Joseph E. Murray, MD, 71, was one of two US citizens awarded the Nobel Prize in Medicine for what The Boston Globe called “pioneering work that paved the way for now-commonplace organ and tissue transplants that have saved thousands of lives.” At the time, Murray lived in Wellesley, MA, and held the title of Professor Emeritus of Plastic Surgery at the Brigham. He shared the $700,000 prize with E. Donnall Thomas, 70, who, in 1956, was the first to perform a successful bone marrow transplant.

In its citation for the prize, the Nobel Assembly said the two doctors made discoveries enabling “the development of organ and cell transplantation into a method for the treatment of human disease. Murray’s and Thomas’ discoveries are crucial for those tens of thousands of severely ill patients who either can be cured or given a decent life when other methods of treatment are without success.” The two recipients were both graduates of Harvard Medical School and were fellow residents at the Brigham Hospital.

Conclusion
While Murray has been retired from active surgery since 1987, he continues lecturing, writing, and consulting. He and his wife, Bobby, live in Wellesley, MA.

When he is not working while officially being retired, Murray enjoys life with Bobby, their six children, and 15 grandchildren. They spend their summers on Chappaquiddick, Martha’s Vineyard. 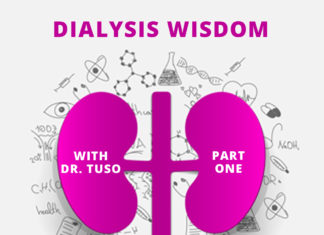 Phillip Tuso, MD tells us what patients need to closely monitor and manage to maintain a healthy body when on dialysis.  This is a...

The Dream That Gets Me Through – 3rd Place Winner, 3rd...

From the Ironing Board to Tokyo: My Worldwide Adventures as a... 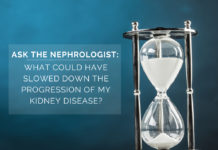 What Could Have Slowed Down The Progression of my Kidney Disease? 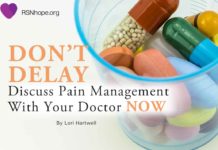 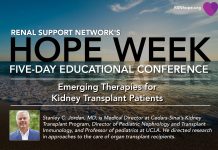 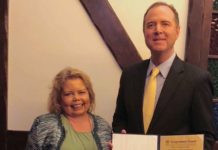