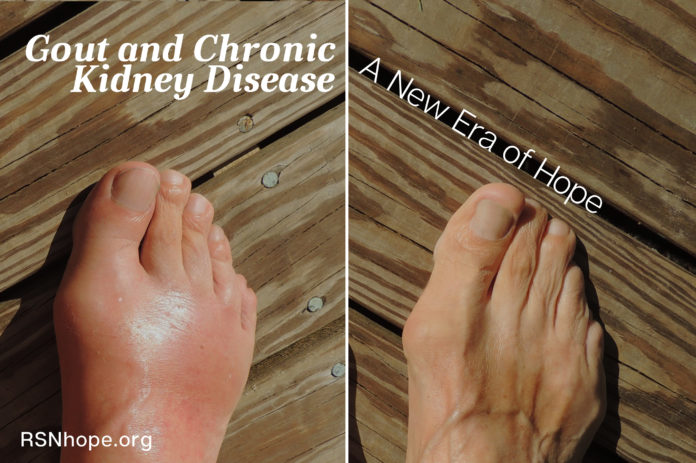 If you have ever experienced Gout, it is something you never forget. It has been described as feeling akin to being stabbed with needles in your extremities.  It most commonly manifests as a swelling in your feet or joints that can make it excruciating to walk. Dr Thomas Sydenham’s account in 1683 of an acute attack of gout is still used today as one of the best descriptions we have.

“The victim goes to bed and sleeps in good health.  About two o’clock in the morning, he is awakened by a severe pain in the great toe; more rarely in the heel, ankle or instep.  This pain is like that of a dislocation, and yet the parts feel as if cold water were poured over them. Then follows chills and shiver and a little fever. The pain which at first moderate becomes more intense.  After a time this comes to full height . . . So exquisite and lively meanwhile is the feeling of the part affected, that it cannot bear the weight of bedclothes nor the jar of a person walking in the room.”

Recent studies give hope to chronic kidney disease patients that we can prevent and treat high uric acid levels and symptomatic gout attacks.

For centuries, those plagued with the anguish of gout have documented the natural history of facing this disease without the benefit of any effective treatments. In patients with chronic kidney disease, the difficulties presented by lower thresholds for drug toxicity limits the treatment options for this special population who are also at a higher risk of developing the symptoms of gout.

It was not until 1962 that scientists discovered that gout is caused by the excess accumulation of monosodium urate (MSU) crystals in the tissues surrounding joints. Uric acid (also known as urate) forms in the body as the natural process of protein break down. Normal levels are less than 7.0 mg/dL. Many people who have chronic kidney disease experience their first attack as their kidney function progressively declines due to reduced urinary excretion of uric acid.

Some patients develop elevated levels of urate over 7.0 mg/dL without the symptoms of gout. This is called hyperuricemia. Once the urate level reaches 9.0 mg/dL however, there is a 5% chance each year of developing symptomatic episodes of gout with pain, swelling and redness in the affected joint. Cold temperatures, increased red meat and seafood consumption along with alcohol intake can precipitate an acute attack of gout which is also more likely to occur in the middle of the night. Unfortunately, diuretics such as Lasix used to reduce swelling in patients with declining renal function can also precipitate an acute attack. Low dose aspirin paradoxically increases gout episode while high dose aspirin can prevent attacks. Daily low dose aspirin for prevention of heart attacks does not appear to influence the risk of gout attacks.

The diagnosis of gout is not straight forward as there are many other conditions which present with the same symptoms even in patients with prior episodes of confirmed gout. The classic presentation is that of the acute onset of a single painful, red and swollen joint in the absence of any known trauma. The two most common confounders that appear as gout are calcium pyrophosphate (CPP) crystals in the joint (also known as pseudogout) and a bacterial infection in the joint. Of the two, diagnosing and properly treating an infected joint also known as a septic joint is paramount to preventing permanent injury to the joint as well as the possibility of propagating a wider infection in the blood stream that we call sepsis that can lead to hospitalization and even death if not treated promptly.

The only way to definitively diagnose gout in the presence of gout like symptoms is to perform an arthrocentesis, which in laymen’s terms is simply placing a small gauge needle into the joint space and withdrawing some of the inflamed joint fluid. Under a microscope, the total number of white blood cells, presence or absence of urate crystals and negative tests for bacteria confirm the diagnosis of gout. Unfortunately, the special microscope needed to diagnose the gouty crystals is not available in most doctors’ offices and most patients refuse to allow a doctor to insert a needle into an already painful joint.

Unfortunately, simply relying on the clinical exam and peripheral blood tests can lead to misdiagnosing an infected joint as an acute flair of gout in up to 5% of cases in some reports. An elevated uric acid level in the blood is not enough to confirm the diagnosis alone. In addition, several of the medications used to treat gout have potentially severe side effects making the correct diagnosis mandatory. Simply put, the correct and rapid evaluation of joint fluid obtained by aspiration remains the only gold standard for the diagnosis of an acute gout attack even with patients with prior confirmed cases. Obtaining consent from a patient in severe pain to stick a needle into the joint is one of the most difficult discussions a doctor can have with a patient, but to date, we have no other confirmatory diagnostic test to replace this simple procedure.

Once the diagnosis of gout is confirmed, dietary restrictions of foods known to increase the risk of gout can be attempted with variable success. Seafood and red meat which are high in purines and proteins can significantly increase the risk of further episodes. Interestingly, vegetarian foods high in purines such as peas, beans, cauliflower, mushrooms and spinach may not increase the risk of gout attacks, but individuals may find certain foods trigger their attacks but don’t in other patients. For people with chronic kidney disease, the dietary changes to avoid gout parallel the dietary restrictions for avoiding cardiovascular disease. High fat dairy products in some patients are problematic as well. However the most important dietary change is complete avoidance of even small amounts of alcohol which have historically been associated with the onset of gouty arthritis and acute flares.

Many medications used to treat gout are less effective in chronic renal disease especially once the creatinine clearance is less than 30 ml/min. For those that progress to dialysis the good news is that almost all of these patients with episodes of gout will have complete resolution of their symptoms. However for up to 13% of patients who choose renal transplant as their preferred option, they will experience gout attacks especially in those transplant patients treated with Cyclosporin A(CyA). A possible approach is to switch to Tacrolimus which has a significantly reduced chance of causing gout but similar effectiveness as Cyclosporin A. However, many transplant nephrologists will choose to continue Cyclosporine A in well controlled transplant patients and instead simply treat the gout episodes with medications that lower the levels of uric acid.

Another successful approach for the patient treated with Cyclosporin A is to use the blood pressure medication Amlodipine to reverse the vasculature constriction caused by Cyclosporine A that leads to reduced excretion of uric acid in renal transplant patients. This approach may not only reduce the risk of hyperuricemia and gout, but it also may reduce the renal toxicity associated with Cyclosporine A that causes progressive dysfunction of the grafted kidney.

Several medications can be used successfully in renal transplant patients including Colchicine but at a lower dosage than in patients with normal renal function. This medication can also be used to prevent future attacks when used on a daily basis. Corticosteroids which are widely used in most anti-rejection protocols can also be used successfully to treat acute attacks of gout at higher dosages than used for antirejection and then taper to pre-gout attack levels over several days. Non-steroidal anti-inflammatory agents such as Motrin, Naprosin and Indocin are often used for acute gout attacks but special attention must be made to prevent secondary side effects of hypertension, and potassium elevations in renal transplant patients.

Allopurinol has been used for several decades to lower uric acid levels by inhibiting the final step in protein break down which significantly lowers the risk of symptomatic gout attacks. However in renal transplant patients, Allopurinol also interferes with the metabolism of Azathioprine often used for immunosuppression which can cause dangerously low levels of white blood cells that fight against infections. Many treating physicians either lower the level of Azathioprine or substitute Mycophenolate mofetil if they choose to use Allopurinol to prevent gout attacks. However, some nephrologists avoid any changes in a successful immunosuppressive regimen and instead use low dose Colchicine which reduces the inflammatory response to gout crystals in the joints but does not lower the uric acid levels in the blood.

Colchicine has many side effects including diarrhea, vomiting and abdominal pain in up to 80% of patients. However, long term side effects can be more serious including reversible nerve and muscle damage, allergic reactions, hair loss, skin rashes and dermatitis, reduced sperm count and renal failure with long term use. The most dangerous reaction is suppression of the white blood cell development in the bone marrow which can lead to life threatening infections especially in patients with immune suppression from anti-rejection medications used with renal transplants. The difficulty in treating renal transplant patients with the usual gout medications has provoked many investigators to search for new and less toxic treatment options.

The New England Journal of Medicine recently published studies on a new and more effective medicine related to Allopurinol that may change how gout is treated in the near future. Febuxostat is a potent alternative to Allopurinol even in patients with mild to moderate renal insufficiency. Febuxostat cannot be used in renal transplant patients treated with Azathioprine since it has the same interaction as Allopurinol who would then need to switch to Mycophenolate mofetil or choose another treatment option for their gout attacks. Yet for those with refractory gout episodes and hyperuricemia, the hope is that this new medicine may not only alleviate one of the most painful maladies known to mankind, but it may also help slow the progression in the decline of renal function which can be adversely affected by high urate levels.

In summary, it is important to properly diagnose and manage gout to prevent long term complications which are even more prevalent in the chronic kidney disease patient and even more so in patients treated by renal transplant due to drug interactions and declining renal function throughout the life of the donated organ. Treatment options for renal transplant patients are tempered by the many drug-drug interactions with the most widely used anti-gout medications and the usual anti-rejection regimens. Recent studies give hope to chronic kidney disease patients that we can utilize a new medication called Febuxostat to prevent and treat high uric acid levels and symptomatic gout attacks. Further information of this complex subject can be found in the articles listed at the end of this article. Preventing and treating symptomatic gout is entering a new era of hope that this dreaded malady may not only be controlled but reversed.

About the Author
Dr. Peter Laird is a renal disease patient who started on hemodialysis in 2007 who is also an experienced internal medicine physician which gives him a unique perspective on renal related issues from that of a physician and at the same time as a patient.  Dr. Laird is currently on an expanded dose of home hemodialysis with the NxStage System One and he is also a regular contributor on the renal issues blog – Dialysis from the sharp end of the needle.