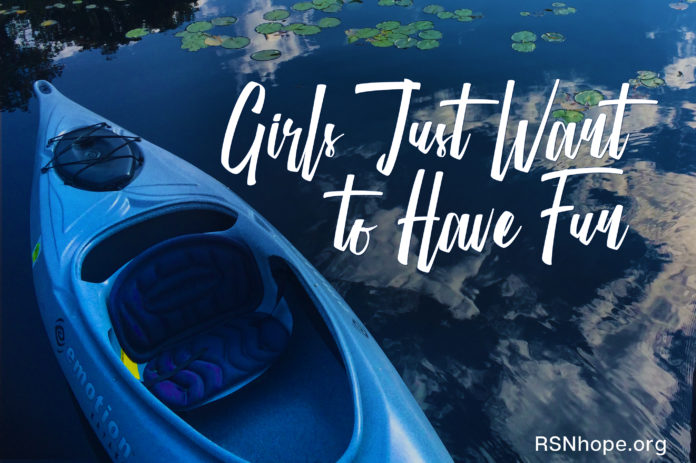 I got out of the car and very gently slid it off the roof. It was a beauty. My husband came outside and just stared at it.“I thought you went to the store to look at something” he said.

My “it” was a new kayak, ten feet long and bright, bright blue. I quickly sat inside and pretended to paddle, a big smile on my face. He looked at me and said, “But it only has one seat!”. I looked up at him, still smiling and said, “Well that’s the point. It’s just for me.”

How much fun do you allow into your life? Have you ever asked yourself that question? I have asked myself that question more than once. As I entered into my 40s, I decided things would be much different for me, but I had no idea how different.

Now you may think of kayaks like I did, as something out of extreme sports. I had seen people on TV go off cliffs and over waterfalls. My plans did not include anything so radical. There was a little pond near my house and I really was looking to have some precious time for myself and maybe follow some turtles & ducks around.

My first year went according to plan: I paddled along small ponds and lakes near my house. My grandson, Jared, liked it so I would take him along and we would kayak along the shore looking for fish.

However, I was not content with that for long. I called my brother Joe who is an adventurer in scuba diving ship wreck sites and mountain climbing. I knew he would help me with my new plan to kayak the Charles River. I asked if he would go with me. Of course, his response was, “Sounds great! Let me see if I can get some other people to go, too.”

We planned our river trip for Mother’s day. By the time the day arrived, we had over twenty-five people going!! There were more than 11 canoes and three kayaks in our little convoy. We had enough food to stop and picnic several times along the river. This was going to be fun!

We started out and as I pushed my way through the reeds and lily pads, I felt just like an explorer as I turned a corner and the whole river lay out ahead of me. I was leading the way; my kayak gracefully gliding across the water. The river was full of life and everywhere we looked there were turtles sunning themselves on rocks, ducks with their babies paddling along behind, and even a great blue heron! We paddled over twelve miles on that trip.

That day remains a very special memory for me because the very next day after my fun kayaking adventure, I started dialysis. I felt great the next day after treatment, no longer polluted and no longer feeling so sick. I was able to return to work.

That was the first change. Then, my next change began: I became a very grateful person. The kayak was only the start of all the changes in my forties. I learned to appreciate each new day. I learned to be patient and learned what compassion was all about.

I found out I was not alone; one in nine people have kidney disease. My eyes were opened to the fact that over three hundred thousand people in the US are on dialysis. I was very fortunate to have this treatment and great doctors available to me.

Twenty-nine months and 3,500 needles later, I got my call for a transplant. My donor had been in a car accident. His family agreed to donate his organs as they knew this was what he wanted.

Recently, I went kayaking down the Charles River again. We all had a wonderful time. It reminded me to look forward to each new experience and allow fun be a bigger priority in my life.