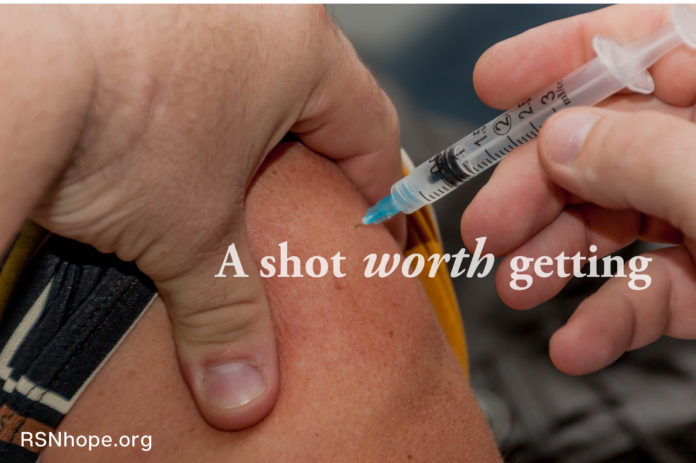 As I approached the fifth anniversary of my kidney transplant, with my lupus in remission and an outstanding creatinine level, I never suspected that this year’s annual flu vaccination would be literally life-saving. Since receiving my transplant, I’ve been very careful to get a flu shot every year. Knowing that my immune system is compromised motivates me to make sure that I have the best chance of avoiding this illness.

While visiting my family over the holidays, I saw news reports about a nearby community where there were sudden, mysterious deaths from an unknown illness. Although I found the news a little frightening because I’d developed a cough, I dismissed my concerns.

The night after our family’s holiday celebration, I woke up with an excruciating headache. I hadn’t ever felt this kind of pain, and its intensity made me realize that I needed immediate care. Also, it was now painful to cough.

I became more anxious as I walked through the doors to the emergency room. My previous health problems and my nearly five-year-old precious cargo made me more nervous than usual about receiving care in an unknown facility.

After I slowly made my way through the double doors to get my vitals checked, I heard a familiar voice calling my name. I didn’t recognize the face, but quickly realized that the nurse who’d walked up was a childhood friend! Despite the circumstances, our joyful reunion decreased my anxiety level.

Unfortunately, my relief was short-lived. The doctor entered the room, took my history, and informed me that I had to be admitted. He told me that it was critical to work quickly. The first test he suggested was a lumbar puncture! My history and the severe headache I was experiencing demanded that he rule out meningitis. I believe that there is one moment when patients decide whether or not a doctor can be trusted with their life—this was it. As I suggested other conditions and treatments, the look on his face said it all.

During the three hours I lay flat on my back recovering from the lumbar puncture, a long cotton swab made an uncomfortable journey down my nose to test for the flu. My headache was worse, my entire body ached, and I did my best to avoid coughing because it was so painful. At this point, my holiday cheer seemed like a distant memory.

When the doctor came back, he said, “Wendy, you have the flu.” I protested that I’d had my flu shot, but I soon learned that the flu is a formidable foe. I barely remember being transported from the emergency room to my hospital bed, but I’ll never forget that in a few hours I was almost helpless.

Several specialists examined me and devised a treatment plan to keep my lupus from flaring and to protect my transplant. They would stop all of my usual medications for one day and bombard me with heavy doses of other medications to help me fight Influenza A, the flu strain I’d contracted.

By nightfall, my symptoms had worsened. I had a cough that felt like fire, a fever of 103 degrees, an elevated heart rate, and pain that was off the charts. I could barely walk, and I was almost incoherent. As I was being treated, I finally escaped into sleep, hoping to wake up feeling better.

That was the worst night of the three I spent in the hospital. Various specialists treated me and followed up, and I gradually got better. I was finally told that I could go home, but my last conversation with the doctor shocked me. I discovered that the unknown illnesses reported on the news were cases of the flu. Patients with the flu were in the intensive care unit fighting for their lives! I was profoundly grateful that I wasn’t one of them. The doctor said, “Because you had a flu shot, you had a first line of defense. It helped save your life.”

My advice: Get your flu shot!

About the Author
Wendy Rodgers is an educator, who in 2009, received a kidney transplant after a nine year wait on dialysis. She has expanded her expertise into advocacy for increased awareness and better health policy for the renal community.  Wendy also served as a national spokesperson for lupus and currently resides in Southern California.