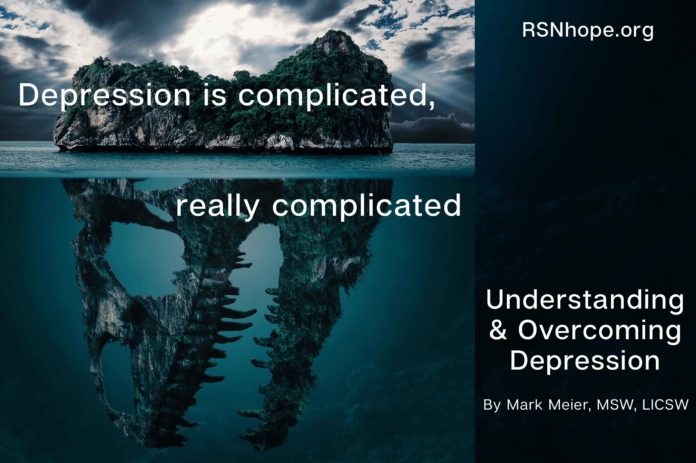 If you’ve ever experienced a soul-crushing Major Depressive Episode, or it’s equally evil brother, Persistent Depressive Disorder (formerly called Dysthymia), I hope I can impart some knowledge to help you battle against such monsters.  For those of you who have never dealt with these characters, count yourself lucky, stop judging those who have, and read this article to gain insight into how you can support family, friends, and fellow CKD patients who are struggling with depression.

According to the American Foundation for Suicide Prevention total about 1.1 million attempts a year; and suicide completions, which according to the Centers for Disease Control totaled 44,965 in 2016.  Depression is real, and deadly.

Depression is complicated. Repeat after me: “Depression is complicated, really complicated!”  Unlike the stages of CKD, delineated by clear biochemical markers, with generally accepted protocols for addressing each stage, depression parades around in many different forms. It is often accompanied by denial about its impact and associated social stigmas.  Our ability to diagnose it is often left to conversations, recollections of painful events, and a completely unexplained etiology. We can’t draw your blood, do a CT of your brain, run you through an MRI, or even order a simple X-ray to determine if you have it.  All of which leave its treatment vulnerable to trial and error, frustration, failure, desperation, and fear.

After establishing the presence of at least one of these two symptoms, we then look for five of the following additional symptoms, which have been present for a two-week period and represent a change in previous functioning:

What all of this represents is PAIN, lots of it. This includes both physical and emotional pain. In fact, the pain is so great that the presence of depression is frequently associated with suicide attempts, which according to the American Foundation for Suicide Prevention total about 1.1 million attempts a year; and suicide completions, which according to the Centers for Disease Control totaled 44,965 in 2016.  Depression is real, and deadly.

It isn’t easy, it isn’t quick, and it requires effort, but for many sufferers of depression there are skills you can learn, attitudes you can adopt, and lifestyle changes you can enact that can provide a path to some peace and contentment.

Further complicating depression is that for so many of us who have or continue to suffer from it, we have a tough time putting our own finger on why we feel so horrible.  We look around and see that we have family, friends, a reasonable upbringing, the ability to pay our bills, and yet we still struggle.  This set of circumstances compounds our guilt and shame, sinking us into self-loathing and disdain that makes no sense to the outside world.  From this place of pain, many of us try to make these feelings go away by self-medicating with food, alcohol, the internet, shopping, gambling, etc.  We become sullen, agitated, and our own worst enemies, as we further isolate ourselves by treating those around us poorly.  We lose hope, we see darkness, and all we desire is for the pain to simply end.The reality is that the onset, recurrence, or exacerbation of a depressive episode is associated with MANY factors. These include: a history of abuse, a lack of coping skills, childhood (or adulthood) trauma, brain structure, dietary intake, a lack of social support, chronic disease (such as CKD), life-hassles, genetics (both our DNA and the environments we grew up in), and a whole host of other factors.

Repeat after me: “Depression is complicated, really complicated!”What causes it? I wish I could tell you that it was simply a “chemical imbalance”, because then we could focus our efforts on developing an antidepressant which could be prescribed and taken correctly, and our problems with depression would be solved.  The truth of the matter is that we simply don’t know what causes depression.  We know that certain chemicals in our body such as serotonin, norepinephrine, dopamine, and others are associated with our moods, but saying that one or the other is out of balance and that is why people are depressed is not accurate nor is it valid science.

Life seems pointless if you are mired in this state . . . but I am here to tell you there is HOPE! In fact, despite all that I have written so far (all of which I experienced firsthand, including a suicide attempt that landed me in the hospital) can be overcome. It isn’t easy, it isn’t quick, and it requires effort, but for many sufferers of depression there are skills you can learn, attitudes you can adopt, and lifestyle changes you can enact that can provide a path to some peace and contentment.

Let’s look at the professional disciplines who can diagnose and treat depression and learn a bit about who they are:

In addition to consulting professionals who diagnose and treat depression, there are other approaches you can adopt to help improve your mood.  For example, we know that lifestyle choices such as eating a healthy diet, regular exercise, and a regular sleep schedule are all helpful in improving our moods.

Many people who experience deep depression have the tendency to isolate themselves and disengage from their friends and family.  I know how difficult it is to find motivation in the face of depression, but it is critical that you do your best to stay engaged with your social network. Friends, neighbors, family, and others in your community can not only “give you something to do”, they can also help you to challenge your negative beliefs and attitudes (these often accompany and exacerbate depression).

We know that spirituality and/or one’s religion can be a source of comfort, especially if it accomplishes the goal of staying engaged positively with others. Part of spirituality for some is learning to meditate, or develop relaxation techniques such as deep-breathing, hypnosis, and visualizations.

Depression is complex and complicated.  It is impacted by a multitude of factors. Keep that in mind as you consider ways to attack it.  I strongly suggest to you that there are no quick fixes, nor are there any easy solutions.  What works for one person might not work for another.  Don’t give up! Keep asking questions, keep looking for professionals with the necessary energy and professional curiosity to help you discover options that work for you, and understand you’re not alone in this fight!

Mark Meier, MSW, LICSW is a Social Worker and is the co-founder of the Face It Foundation which is a Minneapolis-based organization providing peer support for men who deal with depression.  In addition to his role at Face It, Mark is on staff in the Department of Medicine and Community Health in the University of Minnesota’s School of Medicine.  Mark previously worked in a dialysis clinic as a social worker, trained patient care technician, and facility administrator.